Authorities crack down on sex discrimination

Authorities crack down on sex discrimination 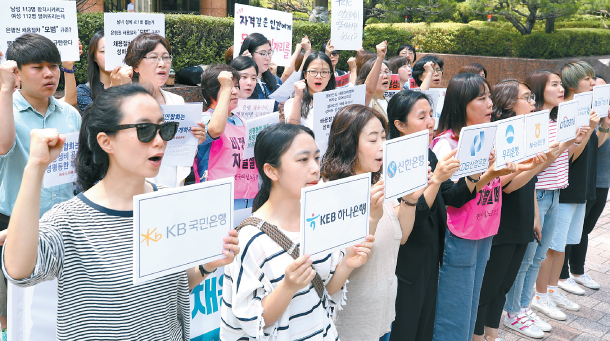 Members of an organization that works to eliminate discrimination against women in employment protest discrimination in June 2018 in front of Korea Federation of Banks located in Jung district, central Seoul. [YONHAP]

Last year, the South Jeolla local government hired security officers and forest rangers. But the openings were limited to men.

The Employment and Labor Ministry ordered the local government to explain why women were prevented from even submitting applications and to change its discriminatory practices.

Gender discrimination is not limited to the public sector.

In hiring baristas, a cafe limited applications to those who completed their mandatory military service, which is limited to men.

“Why would a place that serves coffee needs an employee who served in the military, and it’s hard to understand why it has to be a man,” said a labor ministry official.

Between Sept. 10 last year and Jan. 9, 2019, the Labor Ministry ran a center that accepted anonymous reports on work-related discrimination based on gender. The recruitment process was also covered.

In just four months, it collected 122 reports. That is about one report a day. Although the reports could be made anonymously, 49 were submitted under the person’s real name.

The ministry routinely accepts complaints, but the number received at the special center was far more than usual. Over the past two years, it received a total of 101 cases in the normal course of operations - 39 in 2017 and 62 in 2018.

“We started the center so that people would report anonymously because many are hesitant to report discrimination cases committed within the workplace,” said a Labor Ministry official. “However, reports were filed under real names as women workers today have a better understanding of their rights and are actively engaged against discrimination.”

Of the types of discrimination faced by women, the highest number of cases - 63 or 51.6 percent - involved women being put in an unfavorable position in terms of hiring.

A total of 33 reports were received regarding discrimination related to job training, positions within the workplace and promotions. Cases related to money and wages totaled 23, while 22 were about retirement and layoffs.

Some women were even prevented from submitting applications for available positions. A credit association in Iksan, North Jeolla told a female applicant not to apply.

The Ministry of Employment and Labor warned the financial institution that it will take administrative action and impose a fine of up to 5 million won ($4,433) if the discrimination continues.

Companies that asked about height or weight received administrative warnings. Even after women are recruited, discrimination continued, according to reports filed.

The government found that in one company female workers selected for a specific position received less of a pay raise than others of the same grade.

Companies that forced only the female workers to participate in events regardless of their position or used female employees as secretaries were given administrative warnings.

The number of reports that claimed wage discrimination due to gender difference totaled 26. But it was difficult to conclude how many actually fell under this category as wages can differ depending on work assigned.

There were also a number of cases where the company advised an employee to resign when they were married or became pregnant.

If the discrimination is confirmed, the person or the company could face up to five years in prison or a fine of up to 30 million won.

One company owner, after learning that a new recruit was married, suggested she voluntarily leave the company, telling her he had no intention of hiring a married woman in the first place.

The company owner reportedly told the government the comment was made after the employee was repeatedly late for work after taking her children to kindergarten.

“In order to prevent sexual discrimination and root it out completely, it is necessary for female victims to actively report,” said Nah Young-don, Director-General of the Skills Development Policy Bureau at the ministry.