EV sales doubled in 2018, and that’s only the beginning

EV sales doubled in 2018, and that’s only the beginning 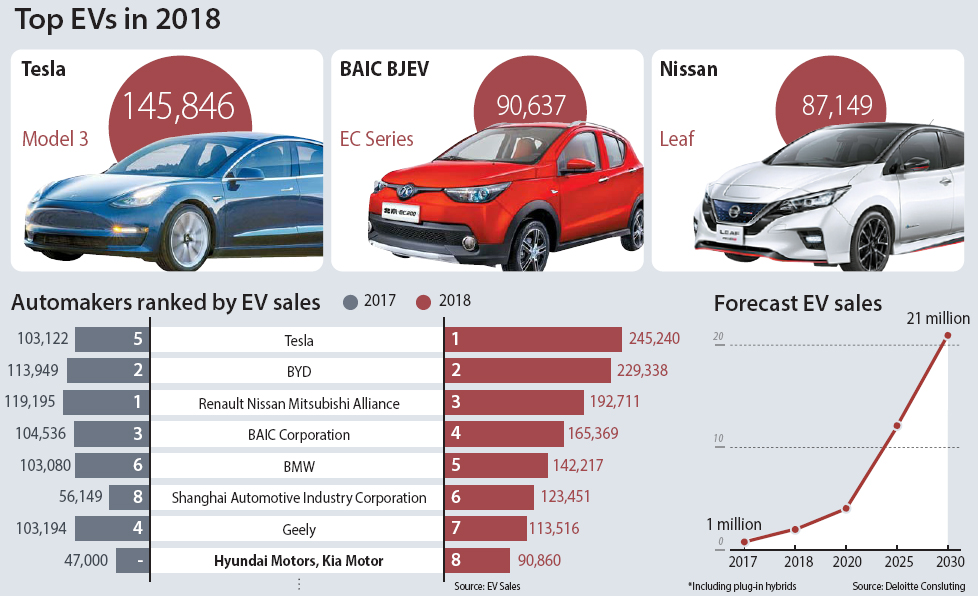 Hyundai Motor Executive Vice Chairman Chung Eui-sun laid out a plan to develop 44 electric vehicle models (EVs) and sell 1.67 million of the cars by 2025 during his New Year’s message held at the beginning of this year.

The revised goal is rooted in the fact that EVs are growing at an unprecedented pace in the global auto industry.

This achievement came seven years after Tesla rolled out its Model S, opening the era of EVs, and more than two decades since Toyota released the world’s first hybrid, the Prius.

The most popular model was Tesla’s Model 3, which started mass production last year. Unlike the Model S and X, which cost over 100 million won ($88,850), the Model 3 was released as a more affordable model with a price tag around 50 to 60 million won. It sold 146,846 units, taking the top spot.

Hyundai and Kia both made it to the top 10 list of automakers for the first time. Combined, the two sold 90,860 units last year, taking the eighth spot.

Tesla sold the most cars, at 245,240, followed by China’s BYD at 229,338. German brands, traditionally strong players in the vehicle market, had BMW at fifth and Volkswagen at ninth.

Industry analysts project the market for electric cars will expand at an even faster speed. Deloitte, a global consulting firm, expects 4 million EVs to be sold in 2020 and 14 million in 2025. By 2030 it expects EV sales to hit 21 million.

Considering that 98 million cars are sold worldwide annually, within 20 years one of every five cars purchased will be an EV.

Experts say that while the United States and China have led the growth of the EV market, that is likely to change in the future.

Deloitte forecast that cost reductions from technology development will pull down the price of EVs to be on a par with diesel cars by 2022. This means the product sector will gain price competitiveness, no longer relying on government subsidies.

The market will also get more competitive. Toyota and Volkswagen are both planning to release new electric cars in the near future, with Volkswagen aiming to make 25 percent of the cars it produces EVs by 2025. Its investment in electric cars is already worth 20 billion euros ($2.25 billion).

According to consulting firm AlixPartners, Volkswagen Group is planning to release 55 EV models by 2022. This accounts for half of all EV models slated for release by then.

“Government subsidies played a big role in enabling Chinese firms to sell large numbers of EVs, but its finances have hit the limit,” said Kwon Yong-ju, a professor from Kookmin University’s department of automotive & transportation design.

“With European companies having accumulated technology and capital while waiting for the commercialization of EVs, the future could be quite different from now.”

“Major countries, like the United States and Europe, have tightened regulations toward environmental pollution more than before,” said Koh Tae-bong, head of research center at Hi Investment & Securities. “For car companies, it is inevitable that they will expand the amount of electric cars they make.”