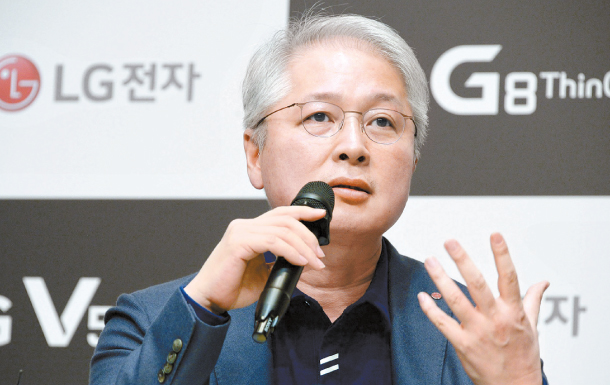 LG Electronics’ major release of the year will be dual display smartphones, which the company hopes will recover its reputation as consumers flock to next-generation 5G smartphones.

“There were internal discussions on releasing foldable phones at the same time but we concluded not to apply the form to early 5G models,” said LG Electronics President Brian Kwon during a press conference at LG Science Park in Magok, western Seoul, Friday.

The event was the first time since he was appointed to head the smartphone business in November that Kwon shared future strategies for mobile business in front of the local press.

“Our direction will allow consumers to enjoy 5G network content through dual displays to be showcased at the Mobile World Congress (MWC).”

“Speaking of displays for early 5G phones, a major question to ask is whether we really need them, is there enough user content that requires such screens? In that perspective, I believe it’s too early to present [foldable phones,]” he added. “In terms of technology, we’re already prepared to make foldable and rollable screens.”

Changes in form, especially screens, will be a major attraction point at this year’s MWC, the world’s largest trade show for phones. Samsung Electronics and Huawei will be rolling out foldable phones that come with two screens overlapping one another.

LG’s dual display phone is rumored to come with a separate second screen that can be attached to the back or beside the main screen, although the company did not confirm the details. Its price remains undecided but Kwon said internal discussions were ongoing over whether to set it above or below $1,000.

The form-factor competition comes in line with the commercialization of 5G networks expected to be realized this year. 5G will transfer data at an extremely high speed, enabling smartphone users to enjoy movies and games at unmatched quality and speed. Phone makers are eyeing the opportunity to win over consumers as they upgrade their phones to models that support 5G.

LG’s strategy for this generation shift is “two track,” Kwon said Friday. Apart from the dual display phones, the V50 ThinQ 5G and the G8 ThinQ will also be showcased at the MWC. They are the latest models from the company’s high-end V and G lineups. V50 will support 5G networks, while the G8 will remain a premium phone for 4G, or LTE, network users.

Underlying the two-track strategy is an uncertainty about how fast it will actually take for 5G infrastructure and related services to expand and how many consumers will jump from 4G to 5G.

“Our plan for the year’s first half is to release the V50 to tackle the 5G market but our direction for the second half will depends on the 5G market,” said Kwon. “If it expands quickly we’ll look into developing a lower priced model that supports the network; if it doesn’t we’ll still have the 4G lineup.”

LG’s smartphone business has been in the red for 15 consecutive quarters as of last year. Kwon was successfully heading the company’s television business when he was appointed to additionally take charge of the mobile division three months ago.

“It’s true that industry insiders are hoping the 5G era will push growth of the smartphone market but as there also conservative projections, our goal for the year is not to make a drastic turnaround in the business but to see sales grow and restore our reputation in the smartphone market,” said Kwon.