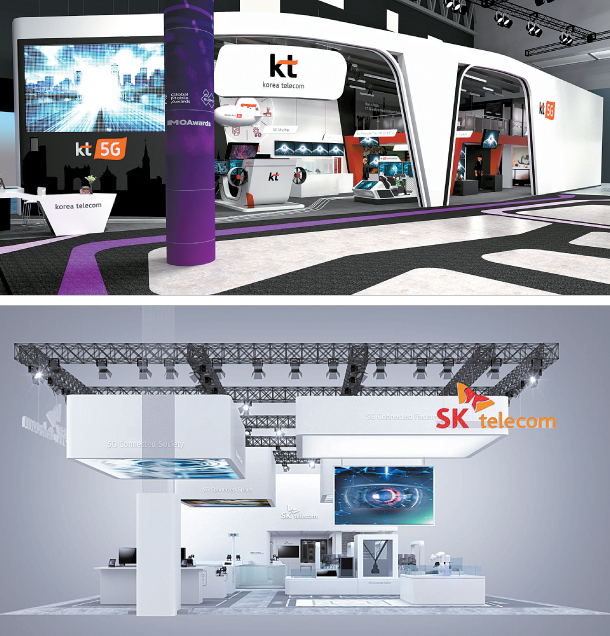 Exhibition booths from KT, top and SK Telecom, above, that will be installed at this year’s MWC Barcelona 2019 to be held in Spain from Feb. 25 through Feb. 28. [KT, SK TELECOM]

The world’s largest mobile industry exhibition, MWC Barcelona held in Spain, is only a week away and Korea’s three mobile carriers are gearing up for a battle to take the lead in the 5G era.

This year’s Mobile World Congress will be held from Feb. 25 through 28, and Korean carriers are participating either by setting up their own or joint booths to show what services they have to offer when 5G, expected to be about 20 times faster than the current 4G LTE, is commercialized in March in Korea.

The country’s largest mobile carrier, SK Telecom, is setting up its own 604-square-meter (6,501-square-foot) booth at Fira Gran Via, the event’s main venue. The company says “it is the only domestic company to set up its own booth for 10 years in a row.”

The company’s main showcase at the event will be a so-called 5G Hyper Space Platform. This platform enables users to meet in a virtual space, designed based on a specific venue in the real world, and make reservations or work on presentations in that virtual space, the carrier said.

Booking a hotel room after virtually observing the interior details of the room and working together on presentations with teammates scattered in different countries at a virtual meeting room will be possible with the 5G-based platform, according to SK Telecom.

The carrier will also introduce its artificial intelligence-based technology that will increase productivity and cut errors at factories, a new blockchain service, and infotainment systems for autonomous driving cars. 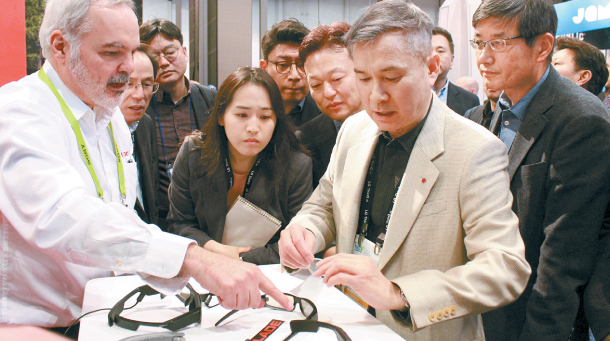 LG U+ CEO Ha Hyun-hwoi, right, examines augmented reality glasses during the Consumer Electronics Show held in January in Las Vegas. He will be visiting the MWC 2019 hoping to expand partnerships for 5G-based media services. [LG U+]

KT will show off 5G-based disaster-relief technology with its 5G Skyship, which KT says is an airship filled with helium that beats drones in terms of flying distance and time. The airship can be used to search for survivors in disaster areas using various camera sensors, including a high-resolution camera and a thermal camera. At the Barcelona event, the carrier plans to demonstrate a camera installed on a Skyship flying in Korea from Spain.

The country’s smallest carrier, LG U+, will introduce its 5G services at a joint booth with LG Electronics. It is preparing to introduce AR, virtual reality (VR) and hologram-based video content, as well as some enterprise-targeting services, such as remote controlled robots, drones and blockchain payment services.

The key focus for LG U+ at this year’s MWC is finding more partners to strengthen its 5G-based media business. It already announced its plan to acquire cable TV company CJ Hello last week and it plans to combine such cutting edge media technologies as AR and VR, as well as fast speeds of 5G with media options, including IPTV.

“There’s growing competition in new business areas, beyond traditional telecommunications business, as convergence between telecom and broadcasting services becomes an industry trend,” said Ha Hyun-hwoi, CEO of LG U+. “I plan to actively look for new 5G business opportunities and partners at this year’s MWC.”

Ha will be taking part in MWC along with some 40 representatives from LG U+.

Heads of SK Telecom and KT are also preparing to ramp up the company’s presence at the global event.

SK Telecom CEO Park Jung-ho is scheduled to participate in the GSMA board meeting a day before the opening of MWC. The board consists of 26 members, including Park, and discusses major issues and the vision of today’s mobile industry. There, Park plans to share how Korea commercialized its 5G network through mobile routers that convert 5G signals into Wi-Fi in December.

KT CEO Hwang Chang-gyu has been selected as one of the event’s keynote speakers. It is the third time he is giving a speech there.

The theme of this year’s MWC is “Intelligent Connectivity.” According to the GSMA, the title describes the “powerful combination of flexible, high-speed 5G networks, the Internet of Things, AI and big data.”

While local mobile carriers show off their competitiveness in 5G network and 5G-based services, global phone makers are likely to showcase 5G-enabled phones and other gadgets.

GSMA said roughly 107,000 key decision-makers in the mobile industry from over 200 countries are expected to take part in this year’s show.