Try before you buy at BMW’s Driving Center

Try before you buy at BMW’s Driving Center 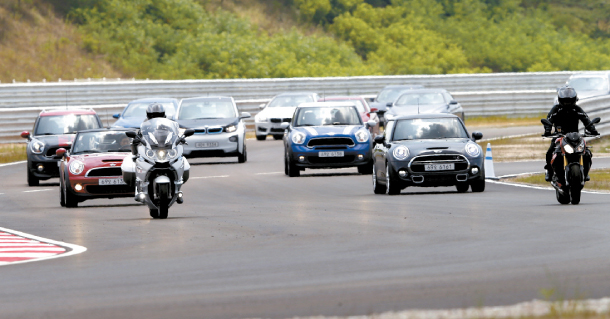 YEONGJONG, Incheon - BMW is still struggling to recover its brand image after a difficult 2018 that saw its cars bursting into flames across Korea during the long, hot summer. With public trust in the German automaker still low, its driving experience center in Incheon may now be more important than ever.

BMW established the 240,000-square-meter (2,583,339-square-foot) driving center on Yeongjong Island, roughly six kilometers (3.7 miles) away from Incheon International Airport, in 2014 to give potential customers an opportunity to experience its cars for themselves.

It is the first BMW Driving Center to be built in Asia and one of only three such centers in the world. Customers can not only see and drive BMW branded cars, but also learn to drive them well on various driving courses including circular and off-road courses.

It cost the carmaker 77 billion won ($68.2 million) to set up the center and about 13 billion won is spent on managing the facility every year.

“The driving center posts about 10 billion won in losses every year due to the high operation cost, but the company keeps the investment for a long-term relationship with Korean customers who like to see and test products for themselves,” said Jang Sung-taek, senior director of the driving center. “Many potential customers visit here and experience what BMW cars have to offer. This place has also become one of the top five tourist attractions in Incheon.”

As of last month, roughly 770,000 people have visited the center to look at the exhibited cars and test drive the vehicles and only about a quarter of them actually owned BMW Group cars, Jang said. According to the company, around 300 people visit the center every weekday on average, while that number soars up to over a thousand on weekends. 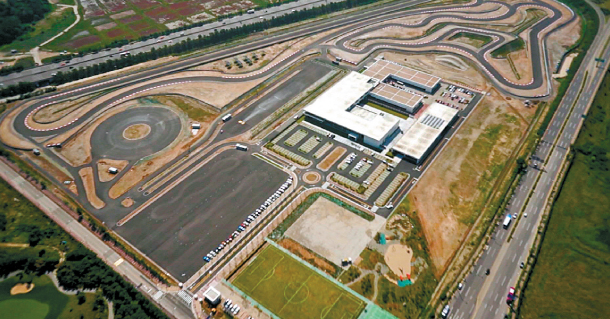 When the Korea JoongAng Daily visited the center to try out one of the training programs on the driving circuit on Thursday, it was already busy with several groups of customers looking at exhibited cars or signing up for the driving programs, despite it being a frigid weekday morning.

After a quick tour around the 10 exhibited BMWs, Mini and Rolls-Royce cars, as well as motorcycles from BMW Motorrad, reporters were sent to a classroom to learn basic instructions for circuit driving and then onto the track where about 95 BMW cars were ready to be driven.

This reporter was assigned to a BMW 740Li xDrive, a gasoline-engine based 7 Series sedan. As soon as the 80-minute “Challenge A” program, designed for beginners, began, an instructor visited each car to check on drivers’ seating positions. The instructor said drivers should never lean their heads back and adjusted the seats so that this reporter was high enough to get a good view and close enough to the steering wheel.

The drive on the center’s 2.6-kilometer track was comfortable, belying this reporter’s expectations of an intense high-speed car chase, because it was a beginners’ program. Six cars moved around the track in a line at roughly 40 to 50 kilometers per hour (25 to 31 miles per hour). The program made it easy enough for all drivers to see how to set the course while driving on circuits with cones on the track.

A higher level training program includes driving on off-road courses and learning how to drift.

The training programs cost between 20,000 and 2 million won depending on the program’s duration and the car models used. They are also offered in English.

BMW is currently expanding the outside driving course by 25 percent. The construction will likely be completed by October, according to Jang. One multi-use course used for basic handling and cornering training and two circular courses will be added to the northern part of the center and several more off-road programs will be added including driving inside pipes and on a seesaw.

Setting up driving centers to bolster brand image and promote sales is a strategy that has been adopted by other automakers. Mercedes-Benz opened a similar driving center, dubbed AMG Speedway, in May last year and launched its own driving academy programs in December by renting out an existing facility in Yongin, Gyeonggi. Hyundai Motor is also preparing to open up a driving center and run training and experience programs by renting out existing facilities to promote it high-performance N brand.