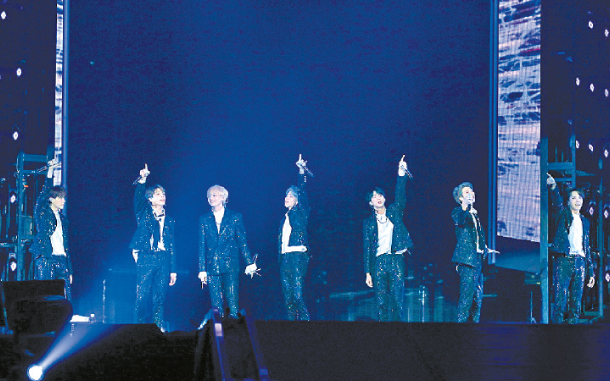 BTS wrapped up “Love Yourself ~Japan Edition~” with the final stop at Fukuoka’s Yahuoku! Dome held from Feb. 16-17, according to Big Hit Entertainment.

It was the final stop of BTS’s tour of four Japanese cities, which kicked off at the Tokyo Dome on Nov. 13 for a two-day run. Following Tokyo, the septet moved on to Osaka and Nagoya.

A total of 380,000 fans attended the Japanese concerts, the agency said.

BTS performed around 30 songs during their final Japanese concert in Fukuoka, some of which, including “IDOL,” “I NEED U,” “RUN,” “DNA” and “FAKE LOVE,” were sung in Japanese.

Fans erupted in applause, singing along in unison to the hit songs, Big Hit said.

The group addressed their fans, saying “We thank you for making us excited and happy up until the very last concert. We are here thanks to you. Fans are the reason we can come on stage.”

Following the Japanese leg, BTS will move on to Hong Kong for performances set for March 20, 21, 23 and 24 at the global city’s Asia World Expo Arena.

After that, the group heads to Thailand, where they will perform at the Rajamangala National Stadium from April 6-7. Tickets for all of the shows in Hong Kong and Thailand are sold out.