A country of quiet airports

A country of quiet airports

HA HYUN-OCK
The author is the deputy financial news editor of the JoongAng Ilbo. 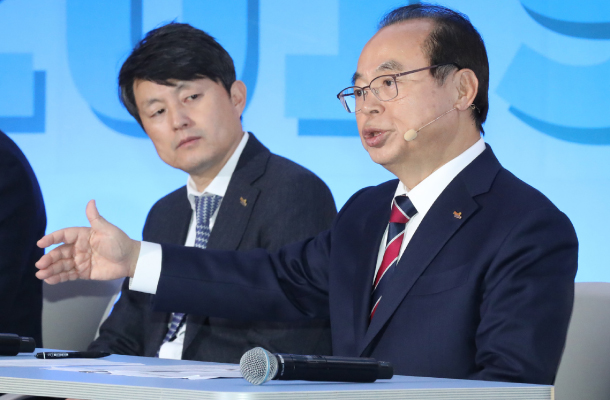 Busan Mayor Oh Keo-don vows to do his best to bring about the construction of a new southeastern airport in Gadeok Island, Busan. [NEWS1]

In 1898, the first unofficial log-rolling competition was held in Omaha, Neb. Two people stand on either end of a floating log and the one who makes the opponent fall into the water wins by rolling the log with their feet. The lumberjack sport began because logs were transported on the river and loggers rolled them with their feet to prevent them from getting stuck.

James Buchanan, the architect of public choice theory, used logrolling to explain something different — the practice of politicians supporting one another by making a deal or contract to support bills or proposals. It refers to the cooperation loggers need to keep pace while transporting logs to the destination.

The local government heads of Busan and South Gyeongsang, as well as Daegu and North Gyeongsang are currently logrolling the construction of a new airport.

On Feb. 14, Busan Mayor Oh Keo-don asked for cooperation in the construction of a southeastern region airport in return for actively supporting a new airport in Daegu. It came after President Moon Jae-in visited Busan and suggested the long-cherished local project of a new airport in the region was being reconsidered. After South Gyeongsang Gov. Kim Kyung-soo reportedly said he would help the new airport in Daegu, some speculate a “big deal” for new airports.

Airport construction is an attractive project for politicians trying to impress voters as it requires a large budget. It helps the local economy by boosting the construction industry and creating jobs; the expenses from taxes are distributed to many, but the benefit is concentrated on the locals. In other words, the classic “client politics” has little risk.

There already are too many airports. In Korea, there are 15 airports, including eight international and seven domestic ones. Only four or five of them are actually making a profit. Yet more airports are being planned, including the Seosan International Airport, with a goal of opening in 2023. Moreover, a second Jeju Airport is being planned and the construction of the Saemangeum International Airport has received an exemption from a mandatory preliminary study.

In May 2009, the BBC reported that Yangyang International Airport was an abandoned airport in Korea. It cost more than 350 billion won ($310.9 million) to make, but less than 30 people use it. BBC cynically stated it was the quietest airport in the world, with no need to wait in line and no delays. Politicians’ love for airports may make Korea “a country of quiet airports” instead of “the land of the morning calm.”