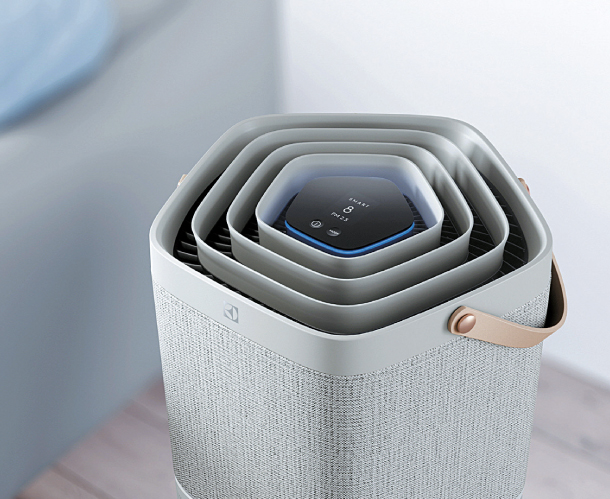 Swedish appliance maker Electrolux’s Pure A9 has wheels for improved mobility and is able to remove 99.98 percent of particles one-eighth the size of ultra fine dust. [JOONGANG ILBO]

The demand for purifiers was highest in March and April last year, when 260,000 and 290,000 appliances were sold. Spring is traditionally the high season for purifiers when pollution from fine dust and yellow dust - dust carried from the deserts of Mongolia and China - is at its worst.

Throughout the rest of the year excluding August to October, over 180,000 purifiers were bought every month in 2018. In the late summer months, when air quality is usually better, around 50,000 purifiers were still purchased every month. In 2016 by contrast, purifier sales only exceeded 100,000 in April. Sales were considerably lower in other months, with August seeing only 15,000 sales.

The average purifier price has also increased as consumers are willing to pay more for products that not only do the job, but do it well.

Various factors like operation method, filter capacity and noise levels played a big role in purifier purchasing. The appliance’s coverage was also an important concern as consumers looked for purifiers that can clean the air in all corners of the home.

Given the growing popularity of high-end purifiers with advanced functions and technology, the average price of a purifier came to 420,000 won last year, 30 percent higher than the 310,000 won average in 2016, according to GfK.

The strong demand for purifiers in Korea has made the domestic market very attractive to foreign makers as well. While Korean manufacturers like Samsung and LG Electronics have traditionally been the most popular, overseas brands that offer innovative designs and advanced technology are now making gains.

Sweden’s Electrolux and Japan’s Balmuda both chose to premier their newest purifiers in Korea last week.

Electrolux, known for its cordless and robotic vacuum cleaners, launched the “Pure A9,” marketing the product as tested and designed to suit the needs of Korean consumers. The purifier, starting from 749,000 won, has wheels and a handle for improved mobility and is capable of removing 99.98 percent of particles one-eighth the size of ultra fine dust.

Balmuda CEO Gen Terao introduced his company’s “The Pure” air purifier himself at a press briefing in Seoul last week, calling the Korean purifier market 10 times larger than Japan’s. The Pure, priced at 749,000 won, allows users to see how much dust is being sucked in at the mouth of the product.