Ediya to roast its own beans at ‘Dream Factory’

Ediya to roast its own beans at ‘Dream Factory’ 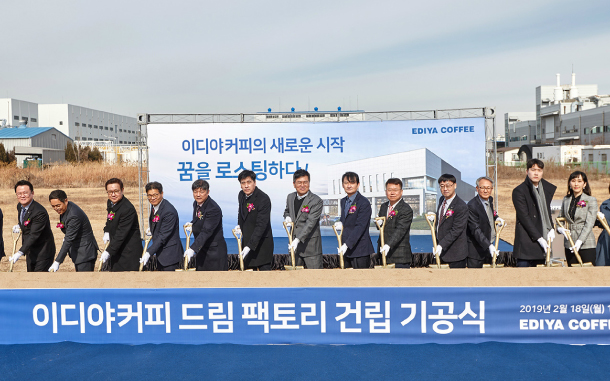 Ediya Coffee, the largest coffee chain in Korea by number of stores, is investing 35 billion won ($31 million) in a manufacturing plant that started construction on Monday.

Located in Pyeongtaek, Gyeonggi, the facility, dubbed the Dream Factory, will roast coffee beans sent to its franchise stores. The brand currently sources coffee beans from external suppliers. Its production capacity will be 6,000 tons of coffee beans per year, making it one of the largest coffee roasting plants in Korea. Ready-made products, such as its stick coffee and powders with which other beverages can be made, will also be mass produced at the facility.

The three-story building is being built on 13,000 square meters (3.2 acres) of land and is due to finish construction in April 2020.

For the company, which raised 20 billion won in operating profit in 2017, 35 billion won is a huge investment.

Ediya expects taking the supply of beans into its own hands will improve the overall quality of the ingredients sent to its stores and will make it possible to pull down its price for franchisees. The local brand has over 2,500 stores operating nationwide.

“Cutting-edge facilities and logistics system are sure to enhance the competence of our Ediya stores,” said Moon Chang-gi, Ediya’s founder and chairman.

According to government data, the average Korean drinks 512 cups of coffee per year. In the last decade, the number of coffee chains has grown at an explosive speed.

While Starbucks has largely been at the center of that boost, Ediya was one of the few local brands that managed to show stable growth in the highly competitive market with a price tag equivalent to half of most coffee chains. Since its establishment in 2001, the brand has never retreated in terms of the number of stores and annual revenue. Results for 2018 have yet to be disclosed, although industry sources say it will likely reach 200 billion won.

As well as roasting coffee beans for stores, the Pyeongtaek facility will also help Ediya expand its range of ready-made products.

Its instant coffee stick brand, “Beanist,” launched in 2012 and now comes in eight flavors from Americano to Toffee-nut latte. The sticks are currently only available through limited retail channels, including Ediya’s brick-and-mortar stores. The company is planning to push sales and marketing for the product once mass production begins.