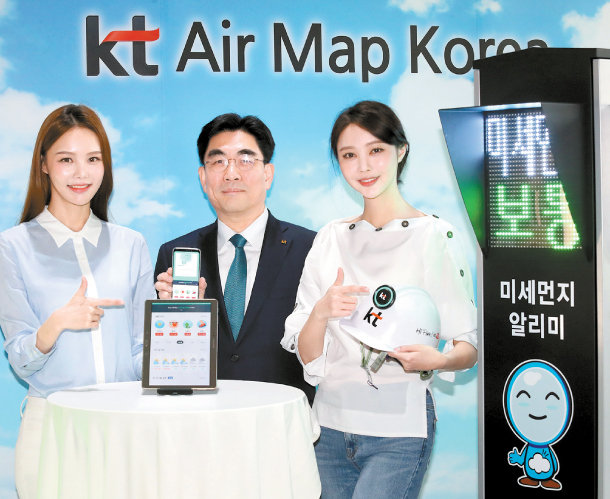 KT launched a mobile application that informs users of real-time air quality on Monday as fine dust continues to be a nationwide problem in Korea.

The KT Air Map Korea app shows whether it is a good day for people to wash their cars, exercise or dry laundry outside depending on the day’s fine-dust levels. The mobile carrier said it will also soon add services that show optimal routes to school for children to avoid as much fine dust as possible.

The company said it will be investing a total of 10 billion won ($8.9 million) into the project.

While the mobile carrier has already set up some 2,000 monitoring stations across the country, it plans to add 500 more within the year. The company will also provide 7,000 safety helmets installed with fine-dust sensors to KT employees at base stations scattered across Korea to collect more data on air quality levels.

According to KT, its app can help schools and offices more effectively manage interior air quality as the app announces the proper time to open up windows. It also said its test project at a local train station proved the app can help the station save 14 percent of the energy spent on air conditioners by announcing the proper and effective times to run equipment.

For those who might struggle to get used to the app, such as elderly users, KT also plans to set up physical warning posts, similar to traffic lights, at key areas where many people enjoy outside activities, like mountains or parks, to show real-time fine-dust levels and send warnings when it’s not good to be outside.

KT said the project is currently run as part of its corporate social responsibility program, but opened up possibilities to develop it into an enterprise-targeted product. The carrier is currently running tests with major air purifier maker LG Electronics, as well as air conditioning equipment maker Shinsung E&G to set up their home appliances to operate based on air quality data from the KT app.

Globally, the mobile carrier inked a partnership with the United Nations Environment Programme, a global environmental authority within the United Nations system, in December to offer its air quality monitoring platform to other countries. The two are still in discussions concerning target countries, according to Lee Mi-hyang, head of the business incubation center at KT.