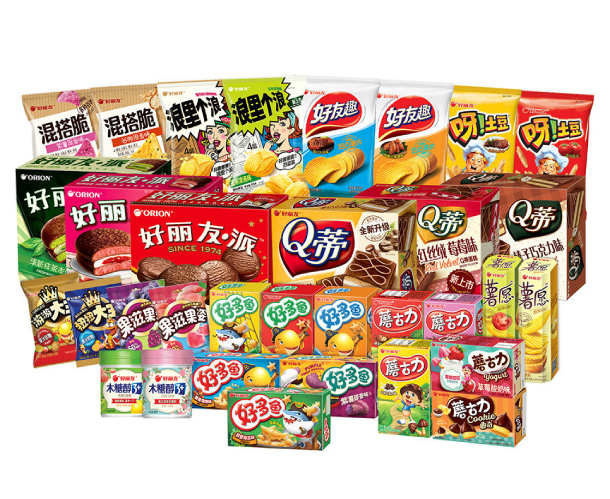 Orion snacks on sale in China. The company released flavors such as Mexican BBQ Turtle Chips in China to appeal to local tastes. [ORION]

Korean food exports to China reached a record $1.51 billion last year, according to data released by the Korea Agro-Fisheries & Food Trade Corporation last December. In 2017, Korea only exported $1.36-billion worth of food products to the country, 7.7 percent less than the previous year.

Food exports are recovering on the back of strong sales of classic Korean snacks, such as Orion’s Choco Pie and popular instant noodles Shin Ramyun and Buldak Bokkeummyeon.

According to Orion, its Chinese subsidiary posted 141.6 billion won ($125.8 million) in operating profit last year, or seven times more than in 2017. The operating profit margin also recovered to pre-Thaad levels, reaching 15 percent in 2018.

Orion cited online expansion and new products as some of the key contributors to improved performance.

“Our company is performing better thanks to recovering sales at small local stores,” said Lee Young-kyun, a managing director at Orion. “We will try to bring revenue and profitability to pre-Thaad levels by introducing over 10 new products this year and continuing to improve our business structure and management.”

It sold 5-million-yuan ($720,000) worth of goods during the 24-hour annual shopping festival on Alibaba’s shopping site Tmall, 25 percent more than on Singles Day the previous year. Nongshim’s online sales last Nov. 11 was over 10 times higher than the daily average.

Samyang Foods, another noodle maker, recently secured access to China’s vast retail network by teaming up with Chinese trader Ningshing Ubay International Trade last month. Through the partnership, Ningshing will become the main distributor of Samyang Foods in China and stock its items across 1,600 convenience stores and supermarkets.

Samyang’s Buldak Bokkeummyeon is at the vanguard of the Korean food offensive. The spicy ramyeon was the No. 1 best-seller among Korean food products at Tmall’s foreign product site, according to the Korea Agro-Fisheries & Food Trade Corporation’s report last November.