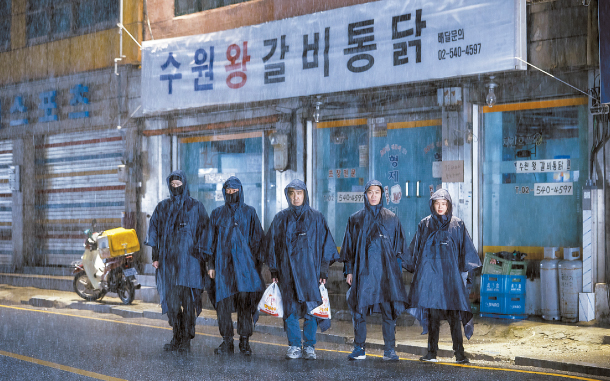 “Extreme Job” easily held on to the top of the box office spot over the weekend. In its fourth weekend, the Lee Byeong-hun title has become the second-best selling movie in Korean history after “Roaring Currents” (2014). [CJ ENTERTAINMENT]

A number of new titles were no match for the mighty comedy sensation “Extreme Job,” which topped the weekend box office for the fourth weekend in a row. Its competition included the heartwarming drama “Innocent Witness,” the horror comedy feature “Happy Death Day 2 U” and Disney’s “Mary Poppins Returns.”

From Friday to Sunday, “Extreme Job” sold 945,000 admissions at 1,166 screens, accounting for 38.6 percent of the weekend’s ticket sales revenue.

According to data provided by the Korean Film Council on Monday, “Extreme Job,” about a low-performing drug squad that opens up a chicken restaurant to crack a crime case but is disturbed by the restaurant’s unexpected popularity, has sold a total of 14.54 million since its release on Jan. 23. 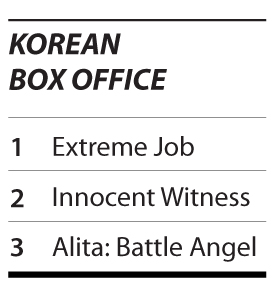 The Lee Byeong-hun-directed title, which stars Ryu Seung-ryong and Lee Ha-nee, pushed out other record-breaking films, including the blockbuster “Avatar” (13.6 million tickets sold), family drama “Ode to My Father” (14.3 million) and fantasy drama “Along With the Gods: The Two Worlds” (14.4 million). The period action feature “Roaring Currents” (17.6 million), in which Ryu also stars, remains the only movie that has outperformed “Extreme Job.”

Coming in second for the weekend was “Innocent Witness,” which sold 530,000 tickets at 993 screens in its debut weekend.

The movie develops after Soon-ho approaches Ji-woo, the only witness to a murder case in which he has to defend the suspect.

While the action-packed “Alita: Battle Angel” slid down a spot in its second weekend to sell 240,000 admissions, pushing its total ticket sales to 1.72 million, “Happy Death Day 2 U” debuted in the fourth spot.

The sequel to Blumhouse Productions’ comedic slasher film “Happy Death Day,” which sold 1.38 million tickets in 2017, reintroduces a popular college girl named Tree (Jessica Rothe), who, in the first film, was forced to relive her birthday, the day she gets murdered, over and over again.

In the follow-up, Tree wakes up in the time loop, not to save herself from a masked killer, but to protect people around her who have also become targets of the killer.

The zombie flick “The Odd Family: Zombie on Sale” rounded out the top five in its first weekend.

The movie, about a suburban family whose lives get disrupted after the elderly father (Park In-hwan) is bitten by a zombie, sold 120,000 tickets over the three days.

It stars Um Jee-won, Jung Jae-young and Kim Nam-gil as members of a family that attempt to rake in cash from a business using a zombie (Jung Ga-ram).

The rest of the top 10 were taken up by animated titles. “How to Train Your Dragon 3,” “Detective Conan: Full Score of Fear,” “Hello Carbot the Movie: The Secret of Omphalos Island” and “Dragon Ball Super: Broly” took the seventh through 10th ranking over the weekend.