Kumgang will be first to restart: Moon

Kumgang will be first to restart: Moon 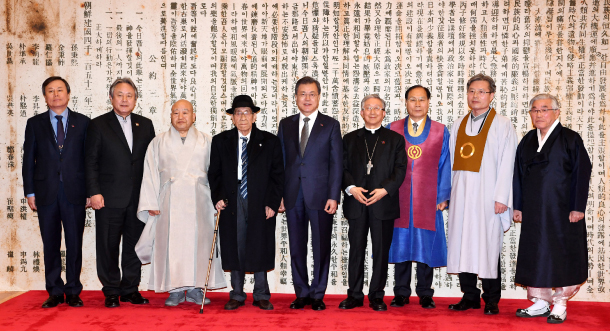 President Moon Jae-in, center, poses for a photo with the leaders of the seven largest religious groups in South Korea before the start of a meeting at the Blue House in Seoul on Monday, which was also attended by Culture Minister Do Jong-hwan, far left. [JOINT PRESS CORPS]

The remark, which Moon made during a meeting with religious leaders at the Blue House, came nine days before North Korea is set to hold its second summit with the United States in the Vietnamese capital of Hanoi.

Pyongyang and Washington are currently fine-tuning their agenda for their leaders’ talk. Pyongyang has been pushing Washington to ease international sanctions, but the Donald Trump White House has not yet given the North a public positive response.

Moon’s mention of the Kumgang tours on Monday prompted local media to wonder whether the United States finally decided to cave in behind closed doors for the sake of progress in the nuclear issue.

The United States has opposed lifting sanctions on the regime until the North completes final, fully verified denuclearization, or FFVD, and pressured the South not to economically engage with the North. Neither Moon nor the Blue House made any further comment on the matter.

Han Jung-woo, the president’s deputy spokesman, explained in a statement Monday afternoon after Moon’s luncheon with the seven religious leaders that Moon said he hoped the government supported the Jogye Order of Korean Buddhism’s plan to operate a temple stay program at Mount Kumgang’s Singye Temple in Kosong County, Kangwon Province, just above the inter-Korean border in southeastern North Korea.

Mount Kumgang was once a linchpin of South-North cooperation when it opened a tour zone in 1998 with the support of the South Korean conglomerate Hanwha Group. It attracted around 2 million visits from South Koreans before Seoul banned all tours in 2008 following the fatal shooting of a 53-year-old South Korean tourist by a North Korean guard.

Kumgang and the Kaesong Industrial Complex, from which the South also walked out of in 2016, are believed to be North Korea’s top priorities for economic cooperation with the South. North Korean leader Kim Jong-un personally mentioned those two projects in his New Year’s address on Jan. 1.

Kim, in this year’s annual speech, said he was willing to resume operations at both venues “without any preconditions,” though it was the South who walked out of both initiatives.

Separately, Moon asked the Ministry of Culture, Sports and Tourism on Monday to “actively support” the Korean Catholic Bishops’ Conference in restoring Pyongyang’s only known Roman Catholic church, the Changchung Cathedral, because Pope Francis could visit the church “sometime later.”

When Moon visited Rome last October, he met the pope at the Vatican and relayed an invitation from Kim to visit Pyongyang. The Blue House said the pontiff expressed his willingness to visit the North Korean capital and some working-level exchanges have followed in December, but the pope’s visit never actually took place.

Moon said Monday that he expected “great progress” in North Korea’s denuclearization and the normalization of ties between North Korea and the United States when Kim meets Trump on Feb. 27 and 28 in Hanoi.