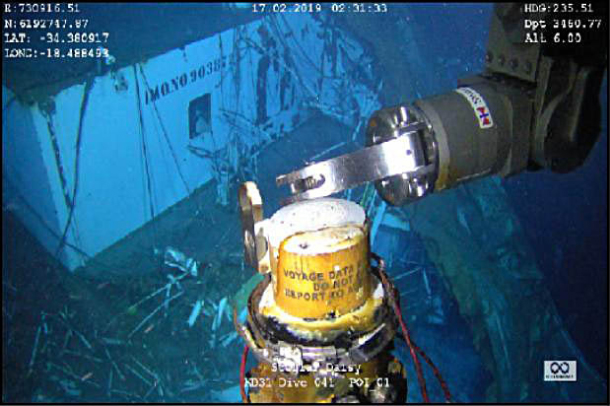 This photo from the Ministry of Oceans and Fisheries shows the recovery of the voyage data recorder of the sunken South Korean bulk carrier Stellar Daisy on Sunday. [YONHAP]

The voyage data recorder (VDR) of the Korean tanker Stellar Daisy, which sank two years ago with 22 crewmen unaccounted for, was retrieved Sunday from the bottom of the South Atlantic Ocean, according to the Ministry of Foreign Affairs on Monday.

The VDR is equivalent to the ship’s black box and can help clear up questions on the sinking of the ship.

The Stellar Daisy sank off the coast of Uruguay on March 31, 2017, while transporting iron ore from Brazil to China.

The 266,000-ton ore carrier had 24 crew members. Two Filipino sailors were rescued after it sank, but the remaining 22 crew members, eight Koreans and 14 Filipinos, remain missing.

The Korean government last December signed a 4.84 billion won ($430 million) contract with Ocean Infinity to track down the Stellar Daisy.

On Thursday, Seabed Constructor reached the location of the Stellar Daisy’s sinking and conducted deep sea search operations for three days before it discovered part of the ship’s bridge and retrieved the VDR, according to the Foreign Ministry.

The VDR is currently being preserved on the search vessel in de-ionized water to prevent corrosion. The vessel is expected to arrive in Montevideo, the capital of Uruguay, by the end of the month.

Investigators may be able to recover various data, such as the date and time of the sinking, the ship’s position, speed and heading, as well as bridge audio. However, it is possible the VDR is damaged.

Family members of the Stellar Daisy crew were also present during the search operation.

The Marshall Islands-flagged ship was operated by Korea’s Polaris Shipping.

The Korean government approved the budget for the deep-sea search for the missing ship last August. The families of the victims signed a petition and staged sit-ins calling for the search to be funded.

“The cause of the accident has to be clearly investigated through the retrieved evidence, including the black box,” the group of victims’ families said through a statement Monday. “We request that the process is conducted transparently without any doubts left behind.”

They also lamented that “the sunken vessel and black box could be recovered so quickly, but the Korean government said that there was ‘no precedent for deep-sea searching’ for the past two years.”

They added, “There should no longer be any excuses for causing victims pain in a disaster by using the excuse that there is no precedent.”