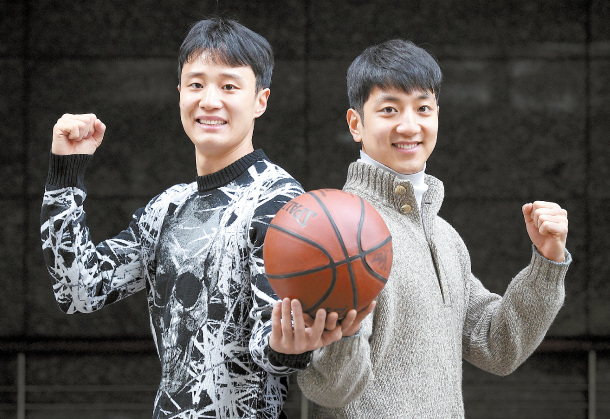 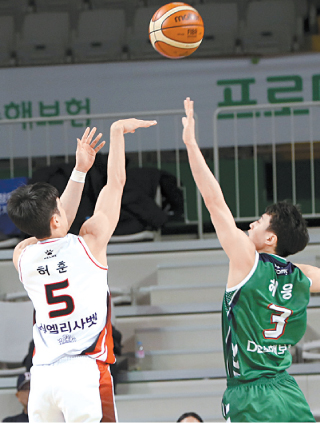 Heo Hoon, left, and Heo Ung play against each other at Wonju Gymnasium in Gangwon on Feb. 13. [YONHAP]

Hur, the father, and Heo, the sons, are two different spellings of the same Korean family name.

Currently, Heo Hoon plays for the Busan KT Sonicboom while Heo Ung plays for the Wonju Dongbu Promy. After graduating from Yonsei University, Heo Ung first made his KBL debut in 2014 and in 2017, Heo Hoon joined the professional league.

When Heo Hoon made his debut, there were a lot of speculations about the brothers facing each other on the court, but it wasn’t until Feb. 13 this year that it actually happened. In 2017, when Heo Hoon joined the league, Heo Ung joined the Sangmu basketball team to fulfill his mandatory military service.

After Heo Ung was discharged from the military last month, the two Heos finally faced each other in the KBL.

“I think we played one-on-one matches a few thousand times when we were little,” said Hur Ung. “We would play for 10 points and the winning percentage was about 50/50. Every time, the person that lost would ask to play another match, so each time, we ended up playing about 10 times.”

In the two’s first professional match-up, the elder Heo came out on top. Heo Ung, the Promy’s shooting guard, led the team to a 80-53 victory by scoring 24 points and picking up six assists. Heo Ung made four out of five three-pointers while the Sonicboom’s Heo Hoon had a disappointing game, scoring only five points.

“Ahead of the game, my father jokingly told me not to give even a point away to my brother,” said Heo Ung. “Just like he said, I knocked him off.”

Heo Ung is playing better than ever before after his stint in the military. During the Promy’s game against the Seoul SK Knights on Feb. 10, Heo Ung made three of five three-pointers and scored 26 points throughout the game.

“During my time in the military, I spent a lot of time thinking how I could survive in the league and keep myself competitive,” said Heo Ung. “I thought if I didn’t waste a day in the military, it could be a turning point in my basketball career. In that sense, I think it’ll be good for Hoon to go to the military.”

Following a loss to the Promy, Heo Hoon earned his redemption against the Knights on Sunday. Only in the third quarter, Heo Hoon scored 17 points, and throughout the game, he scored 25 points, his career best. Although they’re not teammates, Heo Ung watches all of Heo Hoon’s games.

“In defense, it’s hard to block Hoon, a point guard,” said Heo Ung. “I think he developed one step further by going through a tough time on the national team.”

In August 2018, the brothers and their father Hur Jae represented Korea at the 2018 Asian Games. Although it was an honorable achievement for the family to represent Korea, they couldn’t avoid criticism that they were picked for the team as Hur Jae was head coach.

When Korea finished with a bronze medal, Hur Jae resigned as head coach. Although a podium finish is impressive, bronze was still a disappointment to Korea as the team’s original goal was to defend their title. In 2014, Korea won gold.

“It was an honor for a father and his sons to get selected onto the national team, but the result was disappointing,” said Heo Ung. “I’m aware that we didn’t earn recognition from the fans. If we play well from now on, I’m sure we’ll be able to get the fans back on our side.”

Heo Hoon, too, added that the criticism has made the brothers become better and stronger players. Since they made their professional debut, they have always been compared to their father, who was one of the best players in Korea.

“Since the day I touched a basketball, I was labeled as ‘Hur Jae’s son,’” said Heo Hoon. “If we didn’t get the criticisms from the fans, I probably wouldn’t have become a better player. That difficult time made us stronger.”

The brothers will face each other once again in Wonju on Feb. 28. This season, Heo Hoon’s team, the Sonicboom, is ranked fourth with 23 wins and 22 losses while Heo Ung’s team, the Promy, is ranked seventh with 22 wins and 24 losses.

The last playoff spot is more competitive than any other season as the third to seventh ranked teams are only 2.5 games apart from each other.

“Even if I don’t score a point, I’ll do whatever I can to help my team win,” Heo Hoon said.

When the brothers face each other at Wonju Gymnasium next week, they will do so in their father’s shadow. His uniform hangs on the walls of the court as his number, 9, is retired.

“It’s interesting how we’re facing each other at a court that has our father’s retired number,” Heo Ung said. “I’ll work harder to hang my uniform next to my father’s by the time I retire. Although we both failed to get onto the national team this time, we’re going to work harder and get back on the team.”