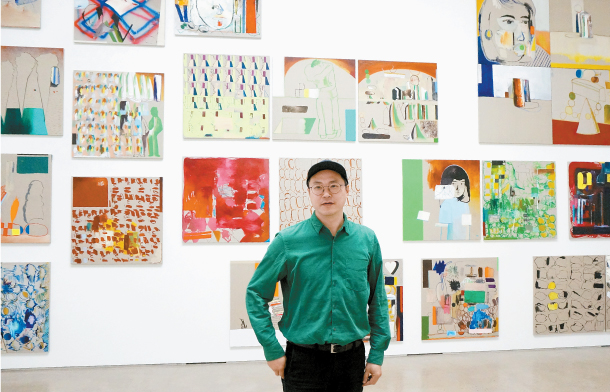 When Bek Hyunjin, 47, appeared in the TV thriller series “Children of Nobody,” which aired on MBC from November to last month, playing an abusive father and dog trader, he left a strong impression. Although his appearance didn’t last long because his character was killed by a mysterious serial murderer, many viewers took to social media asking, “Who is that actor? He speaks like an evil man in our neighborhood - not a fictional villain.”

Articles published by various online media outlets revealed Bek is a singer and songwriter who has fronted the avant-garde indie band Uhuhboo Project since 1994. But they forgot to add he is also a visual artist and was even one of the four finalists for the prestigious Korea Artist Prize in 2017, granted by the National Museum of Modern and Contemporary Art (MMCA) and SBS Foundation. This versatile artist opened a solo exhibition at PKM Gallery, central Seoul, just last week.

The title of the show, “Work Song: Soil, Mattress and Waves,” is a combination of seemingly-unrelated words. The works on display also seem to bear no relation to the title.

There are 65 paintings on square 93-by 93-centimeter (36.6-by-36.6-inch) canvases that cover parts of the gallery’s high walls like big tiles. Some of them are abstract paintings, while others are doodle-like paintings with figurative forms, like a dog and a human face.

“This winter, I saw a mattress with soil around it in an alley. The image lasted in my mind for some unknown reason,” Bek said during a press preview Thursday. “I enjoy staring out at the surface of a body of water. The afterimages of the waves overlapped with the lasting image of the thrown mattress and soil dust. So I decided to put the words in the title of my solo show and added ‘work song’ as a concept to embrace the words.” 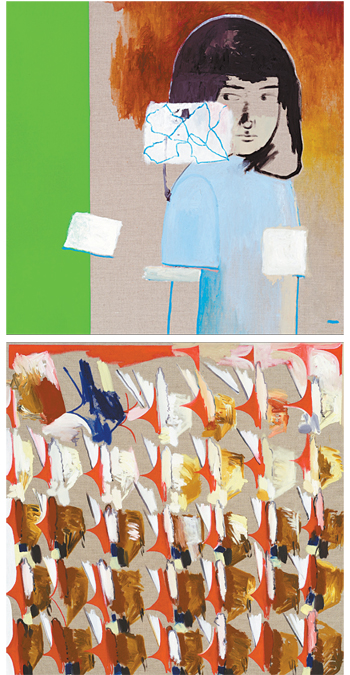 “The ‘work song’ in the title is not a common work song for increasing work efficiency, but the songs I hum while painting so that the silence deepens,” the artist added.

Bek’s explanation was enough to further confuse the audience. Still, the paintings might be interpreted as concerning the minor images and events we encounter every day and the fragments of thoughts and emotions in the stream of our daily lives, which are like a quiet, monotonous song.

The artist picked MBC Radio’s “In Search of Korean Sound” - a long-running three-to-four-minute program that features traditional work songs sung by ordinary people in various rural areas of Korea - as one of his sources of inspiration. Most of the songs are monotonous, but their rhythms and lyrics that tell the story of people’s daily lives have attracted attention.

“On canvas, his ‘gesture / action’ that penetrates painter, singer, performance artist and actor overlaps with his ‘poetic / musical rhythm’ and appears in harmony with the pure abstract and illustrative designs,” PKM Galley said in a press release.

“The paintings in this exhibition can either be independent, or be a combination of two or more, and either way, they exist and function as a component of the whole,” the gallery added. “In other words, each painting presented in this exhibition is a whole, as well as a subset.”

“I have asked my friends which of the paintings now on view they like the best and, to my happiness, none of them picked the same painting,” Bek said.

“I will continue to ask. People will select their favorites for different reasons and I never want to force them to know my intentions about the paintings. That’s my art.”

“People might say ‘Is it a painting?’ I’m used to it, because people would comment about my song, ‘Is it a song?’ and about my acting, ‘Is it acting?’” Bek added, laughing. On the one hand, these questions might reflect people’s fixed ideas about art. On the other hand, the questions might grasp the essence of Bek’s art straddling the border between art and non-art.

His acting in “Children of Nobody” gave a fresh impression to viewers who were seeing him for the first time. However, to those who already knew him, he was speaking and making gestures in his ordinary style. Accordingly, it was both acting and non-acting at the same time.

Bek will also show a combination of his art through the performance “Musical: Permanent Spring,” which will take place every Wednesday and Friday until the exhibition wraps at the end of March. In the performance, he paints a mural while monotonously humming a work song.