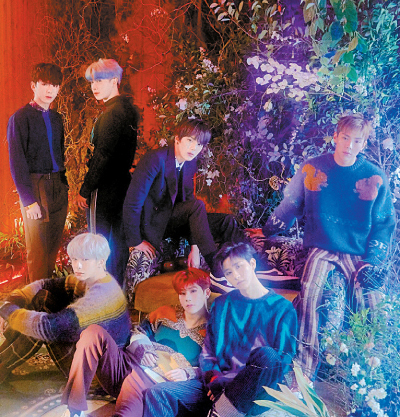 Billboard placed the South Korean band’s upcoming album sixth on its list of “The 10 Most Anticipated K-pop Albums of 2019,” pointing to a successful year for the group in 2019.

Monsta X aims to live up to these high expectations, setting a target of charting on Billboard’s highly competitive “Hot 100” chart with its new album, “Take.2 We Are Here.”

“We have come here step by step. Now nobody can look down upon or shatter us as we have become strong,” Monsta X said in an interview with Yonhap News Agency and other media outlets hours ahead of the album’s release Monday.

“We always prepare enough so we do not feel embarrassed [on any occasion]. Our confidence stems from such preparations,” member Hyungwon said. “We also try not to cross the line between confidence and vanity.”

The band’s latest feats are especially dear to the band members, member Minhyuk said, adding that “We are really happy to see our efforts result in visible, tangible outcomes.”

Monsta X aims to further solidify their K-pop profile with the new album, which will be available for streaming starting Monday evening.

“We Are Here” is a sequel to the band’s previous album, released in October, “Are You There?” which explored the seven Christian sins - pride, greed, lust, envy, gluttony, wrath and sloth - in search of salvation from suffering. The new album answers the question raised in “Are You There?”

The record is fronted by “Alligator,” which comes with a powerful dance performance.

It also includes “Play It Cool,” a collaboration with famous American musician Steve Aoki. The joint work was hinted at by Aoki in an interview with Yonhap in October.

“Brother Steve was the one who first mentioned [a collaboration with] us and we never thought it could come to fruition,” Kihyun noted.

“As soon as we got the song, we talked [to him] on a video call and recorded the song,” he said, adding that the song comes in Korean and English versions.

“‘Play It Cool’ has elements of house music which we haven’t usually played,” I.M explained. “As it’s a new genre for us, [the song] brings out hidden sides of the members.”

Thrilled by the joint work with Aoki, Monsta X asked him why he chose them and the American artist simply said, “Because you guys are cool,” the band reported.

Going forward, the septet seeks to perform on the biggest stages and have their songs hit the Billboard charts.

“Internally, we want to take the stage at Seoul Olympic Stadium,” member Wonho said. “In Japan, we want to tour domes and perform at the Staples Center [in Los Angeles].”

“Before we run out of our music career, I want to have the experience of charting on the ‘Hot 100,’ the main Billboard singles chart,” Kihyun said.

I.M said his goal is to win six K-pop competition TV shows with the latest album.

At 40,000 seats, Seoul Olympic Stadium is the biggest arena in South Korea, while the Staples Center in California is where BTS held a solo concert last year.

The seven band members’ unity, forged through many years of joint pre-debut training, might be one of the reasons Monsta X strongly appeals to global fans, Wonho said, after being asked to name the secret behind their global success.

“Being fabulous is our biggest weapon. We also have strong team work after spending time together as trainees, and our fans know that,” Wonho said.

“K-pop idols do their songwriting and choreography themselves and show the process as content for fans. Having a lot of content to communicate directly with fans is what sets [K-pop artists] apart from [foreign artists],” he said.

Following the record release Monday, Monsta X plans to premier their lead song on the Mnet music show “M Countdown” on Thursday then embark on a world concert tour, which will include a stop in Japan.