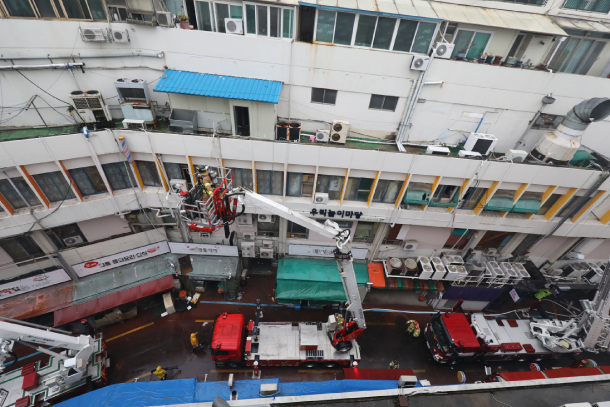 Firefighters work to rescue people who were in a sauna in Daegu where a fire broke out Tuesday morning. Two people died and 68 injured in the accident. [YONHAP]

Two people were killed and 68 were injured after a fire broke out Tuesday morning at a public sauna in Daegu.

The Daegu fire department dispatched 53 fire engines with 150 firefighters as soon as it received the call. Firefighters put out the blaze in about 20 minutes.

Most of the victims were found to have inhaled smoke and were sent to the hospital, including the two deceased and three others who suffered severe burns.

The sauna occupies the third to fifth floors of the building, while the upper stories are residential units. Restaurants are located on the first and second floors.

A witness told police the fire started at the entrance to the men’s sauna.

Police are investigating the scene to find out the exact cause of the blaze.