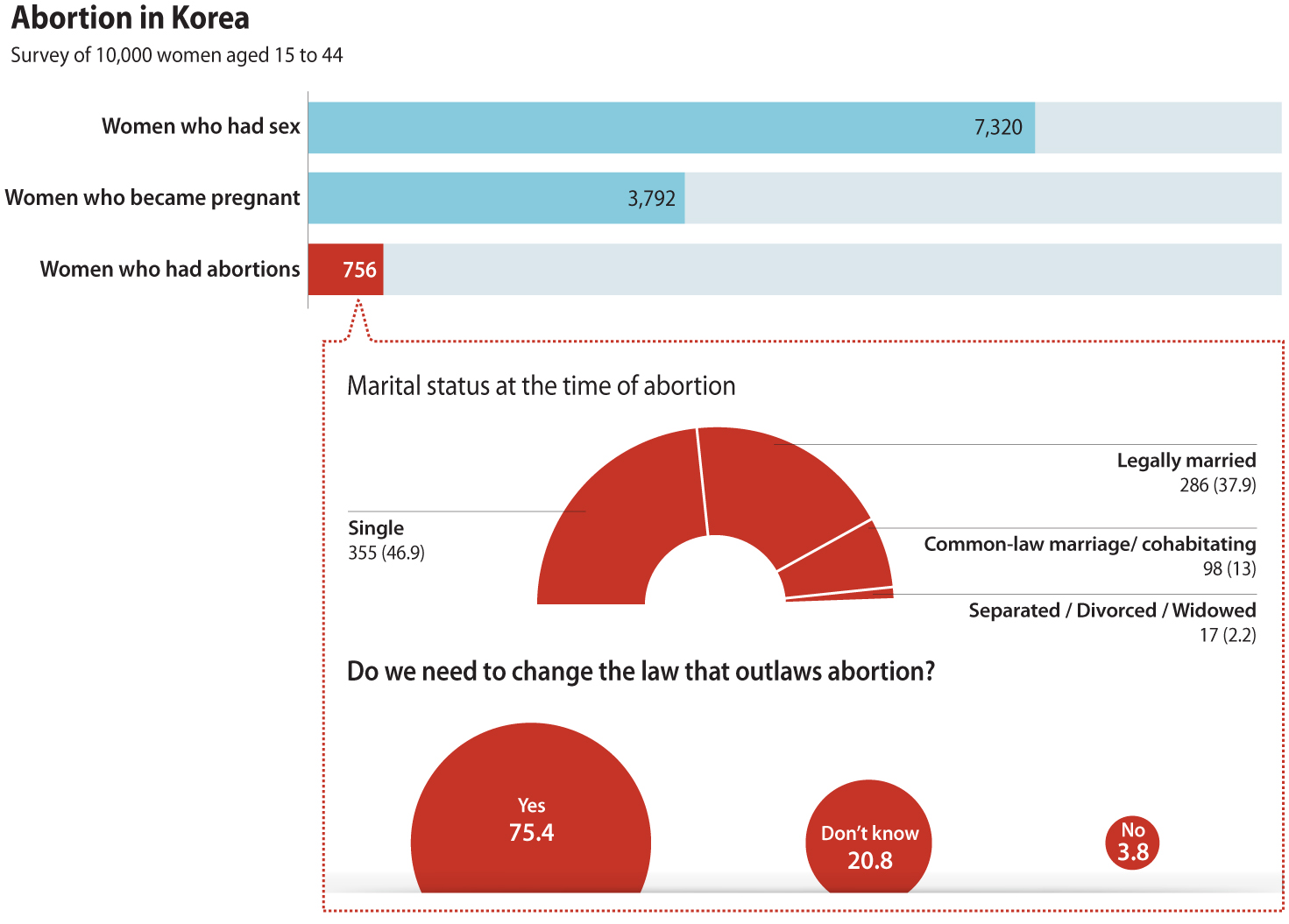 Source: Korea Institute for Health and Social Affairs survey in 2017

When a reporter asked about abortion, which is illegal in Korea, at an ob-gyn clinic in Daegu on Feb. 13, the response was nonchalant.

“Six weeks? Cash payment only, and basic service starts from 700,000 won [$622],” said the receptionist. “You can make a reservation and have the procedure done immediately. You must come with the baby’s father.”

The staff only asked if the pregnancy was confirmed before presenting the price.

On the same day, in another clinic in Seoul’s Jung District, an ob-gyn worker asked a reporter to step inside a counseling room. After the reporter said she was diagnosed as eight weeks pregnant at a hospital and wanted to have an abortion, the staffer said ultrasound and blood tests must be conducted first.

“If you don’t want any record, you must pay the bill without state insurance coverage,” the staffer said. “The whole procedure takes two hours, and it costs 600,000 won.”

Although Korean law defines abortion a crime and punishes both the mother and doctor for abortion with a few exceptions, abortions are routinely performed at clinics nationwide.

A survey released by the Korea Institute for Health and Social Affairs on Feb. 14 estimated that 49,764 abortions were performed in Korea in 2017.

The law makes it clear that terminating a pregnancy is a crime.

“A woman who procures her own miscarriage through the use of drugs or other means shall be punished by imprisonment for not more than one year or by a fine not exceeding two million won,” reads Article 269 of Korea’s Criminal Act.

“A doctor, herb doctor, midwife, pharmacist, or druggist who procures the miscarriage of a woman upon her request or with her consent, shall be punished by imprisonment for not more than two years,” Article 270 of the act also says.

Exceptions are noted under the Article 14 of the Mother and Child Health Act. It says a doctor may perform an induced abortion operation with the consent of the pregnant woman herself and her spouse only if one of them suffers from any eugenic or genetic mental disability or physical or contagious disease.

According to the survey report, only 6.4 percent of abortions in 2017 were legal.

The survey participants reported a total of 1,084 abortions. The institute calculated that in 2017, the abortion rate was 4.8 for 1,000 women aged between 15 to 44. Using the rate, the institute estimated that 49,746 abortions took place that year. That number is just one-seventh of the 2005 survey.

While the government said abortions are decreasing in Korea, doctors are skeptical.

“Abortion is illegal, and how can you trust the women to respond candidly?” said Dr. Kim Dong-seok, the head of the Korean Association of Obstetrics and Gynecologists. The association said over 1 million abortions were performed in 2005, three times more than the government estimate for that year.

A doctor at an ob-gyn clinic in Seomyeon, Busan, said he does not care much about the legality of abortion.

“Throughout my 15-year career, I have performed it,” he said. “I let my conscience decide, because I believe the patients are in need for their own reasons.”

A married woman in her 30s who asked to remain anonymous told the JoongAng Ilbo that she had an abortion two years ago.

“I was pregnant with a third child after our birth control failed,” she said. “We went through some serious thought, but we chose abortion because it was impossible to afford a third child. I am living with guilt that I will never be able to forget for the rest of my life. I have nothing to say if I face criminal punishment.”

According to a poll by the Korea Institute for Health and Social Affairs, 46.9 percent of women said they chose to end their pregnancies because of they could not afford to raise the child. It was the most-selected answer.

Using abortion pills has become a new means to terminate pregnancy in Korea. In countries such as the United States, using mifepristone with a doctor’s prescription is legal. Although sale and usage of the pills is illegal Korea, the drugs are sold on the internet and through social media.

One online seller said shipment takes five to seven days and the price is 550,000 won.

“There are no side effects,” the seller said in a message. “After you take the pills, abortion takes place. You may experience vomiting, but it disappears after 12 hours.” No warning, however, was given about other serious medical side effects, such as damage to the uterus.

The survey also showed that 9.8 percent of the poll participants who had abortions, or 74 people, said they used abortion drugs. Among them, 53 failed in their abortion attempts and eventually visited clinics to terminate their pregnancies.

“I have seen students who came to receive treatment for uterine bleeding after attempting abortion themselves,” said Dr. Choi Anna, an ob-gyn at the National Medical Center. “The most serious side effect is death, but the pills are sold and used recklessly.”

The government rarely cracks down on abortion. When the police receive a tip about a doctor who performed an abortion or a mother who terminated her pregnancy, an investigation is opened, but often the case is dropped.

The South Gyeongsang Provincial Police Agency received a tip in September last year that a clinic in its jurisdiction conducted abortions, and it investigated 26 patients. Five women were confirmed to have aborted their pregnancies, but no charges were filed against them and the doctor.

Even if a trial takes place, prison terms are rare.

After the Constitutional Court ruled in August 2012 that criminal punishment for abortion is constitutional, 80 trials took place through November 2017 at courts nationwide. Only one prison term was handed down.

The Constitutional Court is currently reviewing yet another case on the constitutionality of abortion. A ruling is expected in late March.

The Ministry of Gender Equality told the court in May last year that the ban on abortion must be scrapped. This is the first time a government ministry has done so.

The ministry said abortion is conducted secretly, so women’s rights to life and heath are seriously violated.

“Because of this unenforced law, Korean women are becoming criminals,” it said.