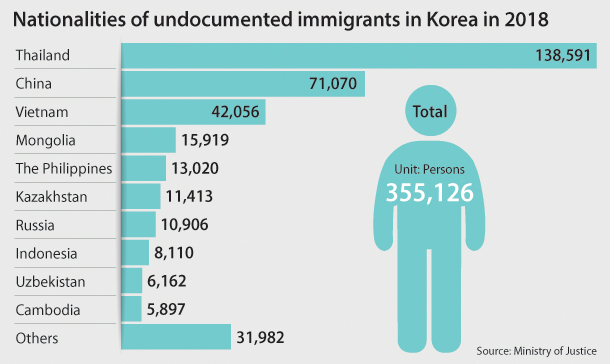 Hanh, a 25-year-old woman from Vietnam, works in a hostess bar in the port city of Siheung, Gyeonggi, pouring drinks and entertaining men with songs.

Hanh, a pseudonym, arrived in Korea last December on a new visa policy that was implemented just days before. The C-3 visa allowed her to visit Korea multiple times for 30-day stays over for five years, with no restrictions on the number of visits.

She was from Ho Chi Minh City, one of Vietnam’s three major cities - alongside Hanoi City and Da Nang - whose residents were all allowed to apply for the visa.

A five-year multiple-entry visa used to be issued under far stricter conditions for Vietnamese. They had to be government officials or workers for public companies, who have stable incomes, so Korean authorities didn’t have to worry about them overstaying their visas as undocumented immigrants.

While announcing more Vietnamese would be eligible to come to Korea, South Korean officials explained it was a gesture of gratitude for Vietnam’s profound affection and interest towards the Korean coach of Vietnam’s national football team, Park Hang-seo. He played a pivotal role last year in strengthening bilateral ties.

Hanh told Korean customs authorities she was here to travel. But she never did. She went to Siheung and started working in the hostess bar.

When a special reporting team from the JoongAng Ilbo met Hanh last month, she was preparing to return home, as her one-month stay was ending.

Hanh was lucky - she was never caught by the authorities for working illegally. But data from the Ministry of Justice showed that 21,309 foreigners were busted from January to November last year for working illegally here. About one-third - 30.4 percent, or 6,479 people - of them worked at hostess bars, massage parlors, karaoke rooms or as prostitutes.

By the end of last year, 355,126 undocumented immigrants were caught in Korea, about 100,000 more than in 2017. Over 90,000 people who arrived in Korea legally but overstayed their visa last year came on a short-term tourist visa.

Thai visitors made up the largest share, with about 39 percent of all undocumented immigrants caught last year having come from Thailand. They were followed by China (20 percent), Vietnam (11.8 percent), Mongolia (4.4 percent), the Philippines (3.6 percent), Kazakhstan (3.2 percent) and Russia (3 percent), statistics from the Justice Ministry showed.

When a JoongAng Ilbo reporter explored the red-light district of Jeongwang-dong in Siheung on Jan. 18 at around 8 p.m., several karaoke rooms had signs that read “Vietnam,” “global” or “multicultural.”

When the reporter stepped into one of the establishments, pretending he was a customer, the owner asked which nationality he preferred as his hostess.

She bragged that she could bring over a truckload of women from Vietnam, Mongolia and Thailand. An hour with one hostess costs 70,000 won ($62) in cash or 80,000 won via credit card, she said, adding that customers could enjoy unlimited soju and beer.

“Customers will swarm in from 10 p.m. and you’ll have to wait a really long time after then for the girls to come to your room,” the owner said, as if to warn the reporter that it might be his last chance to select a hostess he likes.

Ten minutes later, two Vietnamese women came with such good Korean he could barely believe they were foreigners. They explained to him they had learned Korean in Vietnam at a language institute.

One of the two women, a 25-year-old, said she has a job at a factory during the day and works part-time at the karaoke room two to three nights a week, and makes a little more than 2 million won per month overall.

“Some of my colleagues go to second rounds with the customers to make more money quickly,” she said.

Another Vietnamese woman, 28, who works at a karaoke room in Changwon, South Gyeongsang, said she used to work at a factory but wanted to make more money, which is how she got into the business. She found a job via YouTube in just a few clicks.

Sometimes, undocumented immigrants enter the hostess and prostitution industries through job brokers. Some sources with knowledge of the process told the JoongAng Ilbo that brokers in Vietnam who provide vocational training for the women round them up and divide them into three groups - A, B and C - depending on the “level of their looks,” and decide early on what work they’d be assigned to in Korea, with the least attractive being sent to a factory or farm.

Others blame a collegiate certificate granted by the government for increasing the number of undocumented foreigners working here.

Every year, the Justice Ministry grades universities’ level of “internationalization competence” by looking into their support for tuition and lodging, as well as their foreign students’ level of Korean. The ministry also checks how many students don’t drop out or leave school to seek a permanent job here illegally.

But multiple education officials point out that the certificate, bestowed upon at least 86 universities so far, is actually what’s causing a surge of undocumented immigrants.

Certified universities don’t have to submit documents proving their foreign applicants’ level of scholastic aptitude or income level to local customs authorities during visa screening. The only documents the schools are required to hand is an admission acceptance letter. The simplification of this step has allowed the universities to accept more foreign students than before, but recent data show a dark side to this.

According to the Justice Ministry, 881 foreign students disappeared last year without informing their school, nearly nine times more than the 95 students who did so in 2015, when the “internationalization competence” certificate was first introduced. In 2016, 192 foreign students vanished, and in 2017, 218 students did so.

One faculty member at a local university who asked not to be named said some Vietnamese job brokers were abusing the system by rounding up Vietnamese students who want to find jobs in Korea.