Finding the strength of a fighter: Ko A-sung on how intense it was to play activist Yu Gwan-sun

Finding the strength of a fighter: Ko A-sung on how intense it was to play activist Yu Gwan-sun 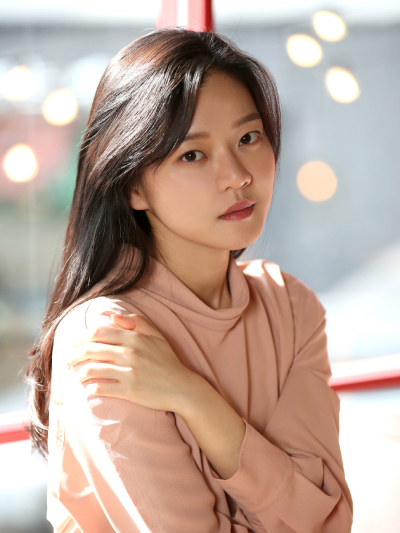 Actor Ko A-sung shares her experiences filming the film “A Resistance” at a cafe in Samcheong-dong, central Seoul, on Tuesday. [LOTTE ENTERTAINMENT]

Yu Gwan-sun (1902-1920) was only 16 years old when she marched into the streets on March 1, 1919, to protest Japanese colonial rule in Korea. It was a non-violent protest, with people holding the Taegeukgi (Korean national flag) and chanting “Daehan dongnip manse!” (Long live the independence of Korea).

In April that year, she organized another protest in her hometown of Cheonan and marched through the streets again. But this time, her parents were killed and she was sent to Seodaemun Prison located in western Seoul. However, that didn’t stop Yu from organizing another rally in the prison; on the first anniversary of the movement, Yu and her fellow inmates exclaimed “Manse!” even though it meant more torture from Japanese soldiers.

She was eventually sent to a solitary cell and stayed there alone. In Sept. 28, 1920, Yu died in prison from severe injuries sustained from torture and beatings.

In commemoration of the centennial anniversary of the March 1 Independence Movement, the black-and-white film “A Resistance” will hit theaters on Feb. 27, recounting Yu’s days spent in the prison. The low-budget film supported by the Korea Film Council was both directed and written by Joe Min-ho, who was behind the films “Les Formidables” (2006) and “A Million” (2009). The movie stars actors Ko A-sung, Kim Sae-byuk, Kim Yae-eun and Jeong Ha-dam.

At a press conference held last Friday, director Joe said that he was curious where “the sad yet strong look from a 17-year-old came from” when he one day paid a visit to the prison and saw her picture hanging on the wall.

“Life in the prison probably affected Yu in a big way,” he said. “I was impressed by her mindset - although she knew she could die in prison, she organized a rally there to commemorate the first anniversary of the March 1 Movement.” 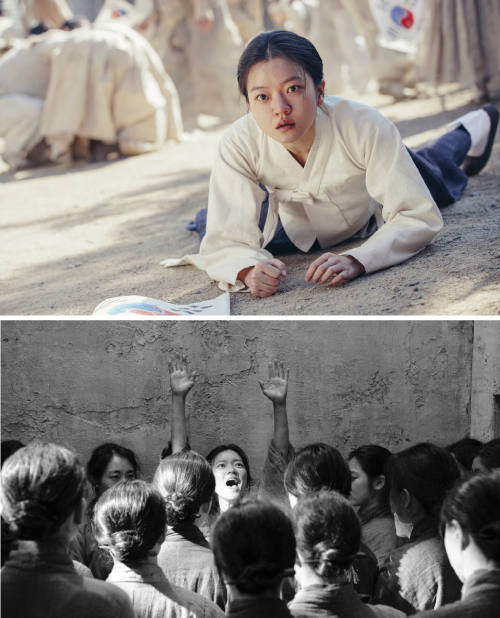 Yu Gwan-sun, played by actor Ko A-sung, took part in organizing the March 1 Independence Movement in 1919 at the age of 16. While she was in prison, she organized another rally with her fellow inmates to commemorate the movement’s first anniversary. [LOTTE ENTERTAINMENT]

Actor Ko, who plays the role of Yu in the film, shed tears before she could answer any of the questions at the press conference. At an interview held on Tuesday at a cafe in Samcheong-dong, central Seoul, Ko made it clear that she went through so many emotions while filming the movie that she could not hold back her tears.

“When I think about Yu, I think about respect and sanctity,” she said. “The film features the humane side and the inner emotions of Yu. The movie starts with Yu entering the prison, and she is the last member to join [cell number eight.] Yu must have felt so many emotions before she organized the rally at prison. It wasn’t easy to [understand and act out] such feelings in the film.”

The film, according to Ko, was about responsibility and guilt.

“Responsibility is what Yu must have felt the most at the time. It’s what she must have felt when she went to her hometown after the March 1 Movement. She also must have felt frustrated after seeing her neighbors [get killed and suppressed] at the April rally she organized. And in prison, she once again organized a rally even though she knew that she would get hurt. At the same, I felt guilty because while I played this real person from the past, I was reminded that she really existed. I constantly questioned whether I was playing this character well enough.”

Ko knew from the beginning that filming this particular movie was not going to be easy. However, she was drawn to the film because it told the story of Yu’s year spent in prison. After she received the script for the film, she thought about it for a week, and then decided to join the cast after meeting with the director. She felt “a sense of trust” in director Joe. And that’s when she immediately started to study her character.

Her wish is that the other activists stand out as well in the film.

“After I received the script, I actually talked to several close actor friends. Some of them told me that the film itself is very significant, but if I want to make it more significant, I should emphasize other actors’ roles, too. They told me to take Yu’s role if I can confidently do that.”

When she first began filming, she was so nervous that the audio director had to change the location of the microphone placed on her chest.

“The sound of my heartbeat was so loud that the director told me that they could not hear my voice well,” she said. “That’s how nervous I was at first.”

But after that, everything went as planned and everybody worked very hard. Ko even had to fast for five days in order to express Yu’s severe pain in the film.

“It was promised since the beginning,” she said. “The director told me that he would give me a five-day break, and asked me to look different than before. After discussing it with my makeup artist, I decided to make a big change to my look. So, I decided to fast for the five days. The hardest part was not being able to drink - I was worried that my face would get swollen if I drank anything.”

On the final day of the filming, all the actors shed tears after finishing the last scene.

“We got very close to each other while filming. We laughed a lot and enjoyed filming together. But somehow, we were all crying right after. The one month of filming was short and intense.”

Ko hopes that many people reflect on the lives of the independence activists after seeing the film.

“I hope that people take time to reflect on not only Yu, but other independence activists as well. That’s the only thing I’m hoping for.”