Top: A screen capture of a Brooks Brothers jacket on sale. Bottom: The same jacket sold at a much higher price when the website redirects for a Korean customer. Middle: A pop-up when opening the Brooks Brothers website. Right: Dr. Martens website refusing Korean credit card. [WEBSITE IMAGE CAPTURE OF BROOKS BROTHERS AND DR. MARTEN]

Kim Sang-yong, 42, is obsessed with jikgu, or direct foreign purchases.

“Even if the brand has a store here in Korea, the benefit of jikgu is that I can get goods at a much cheaper price as brand websites frequently offer discounts, and there are always items with slashed prices,” said Kim, an office worker.

However, he was recently dumbfounded when the website of a globally-known brand rejected his credit card payment. He tried again by registering his card through PayPal, but the payment was repeatedly rejected.

“When I asked the headquarters via email, they responded that they now longer accept cards from Korean issuers,” Kim said. “It didn’t feel good as it felt as though they saw Korean buyers as suckers.” 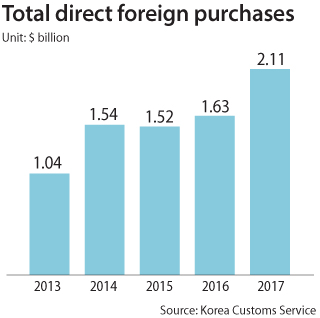 Choi Hyo-jeong had a similar experience.

The 29-year-old is an avid user of jikgu, as she can purchase clothes already out of stock in Korea and can access a diverse range of sizes.

Even if she has to pay extra for delivery, it’s worth it since it is even cheaper than buying from stores in Korea.

But when she tried to purchase clothing from a well-known U.S. online shopping mall, her Korean credit card was declined.

“I only received an email saying my payment was canceled,” Choi said. “I don’t understand why a global brand would block the use of a Korean credit card.”

While foreign direct purchases in Korea have been growing at a record pace, some foreign brands have been adopting policies that limit the access of Korean consumers purchasing their goods directly online.

The restrictions are being implemented on concerns about declining sales at the local operations of the international brands.

One of the latest tactics is to raise the price of goods being sold online when being purchased in Korean won.

Brooks Brothers, the Italian-owned U.S. brand, holds a regular sales event on its official global website. But the prices of goods double when Korean consumers purchase in the Korean currency.

When accessing the men’s wear company’s official website, the customer is offered a “shipping upgrade” based on their IP address. It allows them to choose the country to which the item will be delivered.

If “Korea” is clicked, the price increases.

“For some of the products, prices can increase as much as 20 percent when the item is shipped to Korea as various expenses are added,” said an official at Brooks Brothers Korea. “However, it is our head office’s policy not to have a huge difference in price between jikgu and imported products.”

The foreign direct purchase market has expanded rapidly since the Park Geun-hye administration in 2014 started to deal with monopolistic and oligopolistic practices in the import of consumer goods following a surge of complaints.

The government simplified customs clearance on all products, except food and medicine, and allowed medical supplies to be imported using the delivery company invoice. It also raised the duty-free import limit to $150 from $100.

“As the government eased the entry of parallel imports on the back of controversy surrounding importers raising the prices of global brands excessively, improvements have been noted, such as the falling price of imported goods sold here in Korea. Jikgu is now possible,” said Suh Yong-gu, a marketing professor at Sookmyung Women’s University. “However, recently global brands have started to limit sales.”

As other global brands, in addition to Brooks Brothers and Dr. Martens, have started to limit sales via their global websites, some Korean consumers have started to use delivery agencies located in the United States rather than purchasing directly. Some have started to share workarounds, such as how to change their PayPal address to a U.S. address to avoid price discrimination.

“In terms of deciding the price, it is completely up to the manufacturers, so it is hard to stop foreign firms from blocking transactions,” said Yang Ji-seon, head of the International Transaction Support Team at Korea Consumer Agency.