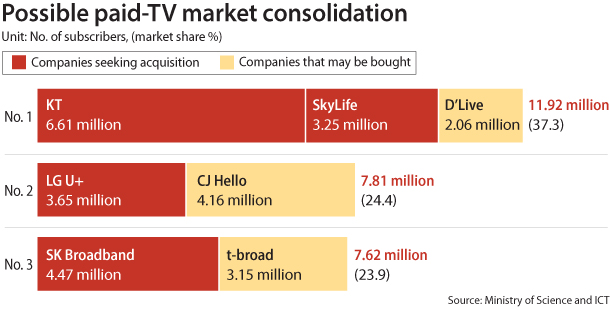 Korea’s paid-TV market is on the cusp of a major transformation.

“SK Telecom and Taekwang Group, the holding companies of SK Broadband and t-broad, are currently negotiating the merger of their TV operations,” said a source on the condition of anonymity.

“It’s possible that the two companies will sign a memorandum of agreement this week,” the source added.

A merger is expected to allow SK Broadband to strengthen its foothold in the paid-TV market in a cost-efficient way as it would only require a stock swap with t-broad.

Market watchers predict that with an SK merger on the way, KT will have no choice but to pursue transactions on its own to stay ahead of the game. KT is reportedly considering acquiring D’Live, another cable company.

“If SK Broadband merges with t-broad, it’ll become more likely for KT to acquire a cable company,” said Kim Joon-seob, an analyst for KB Securities. “Because KT and KT SkyLife’s combined market share is currently at 30.86 percent, however, the company will probably move forward with the acquisition after the National Assembly comes to a decision on paid broadcasting regulations.”

The National Assembly’s Science, ICT, Broadcasting and Communications Committee is set to decide next Monday on whether to reintroduce a rule that expired last June that prevents a paid-TV provider from controlling more than 33 percent of the market. If the committee agrees to reintroduce the rule, it may be impossible for KT to acquire D’Live, which has a 6.4 percent market share.

The mobile carriers, which are each related to an IPTV provider, are also being pushed to develop their TV and media services as new sources of revenue given the saturated mobile market and falling telecom profits.