Veteran actor Lee Jung-jae tries his hand at a thriller: In ‘Svaha: The Sixth Finger,’ Lee plays a pastor looking for truth

Veteran actor Lee Jung-jae tries his hand at a thriller: In ‘Svaha: The Sixth Finger,’ Lee plays a pastor looking for truth 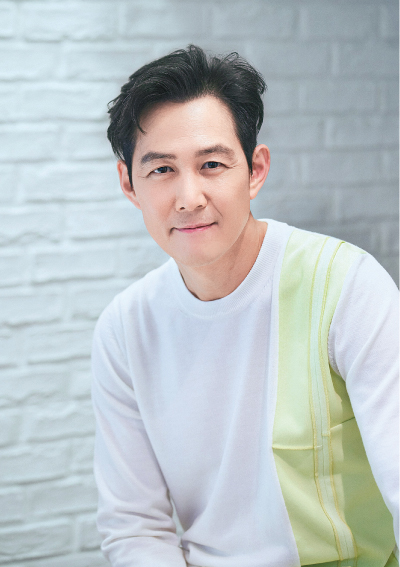 Veteran actor Lee Jung-jae always pays close attention to the occupation of his character when he is choosing which roles he wants to play so he can show off something new in each project. In that sense, his role in the mystery thriller “Svaha: The Sixth Finger” was the perfect choice after a slew of period stories like the acclaimed “Assassination” (2015) and the box office flop “Warriors of the Dawn” (2017).

The first film from director Jang Jae-hyun since “The Priests,” which sold 5.44 million tickets in 2015, “Svaha,” which Jang also wrote, is another mystery thriller that touches on the theme of religion. Yet while “The Priests” focused on the intense battle between good and evil, “Svaha” is more mysterious, driven by Lee’s character Pastor Park, who struggles over his faith in God.

“The role of Pastor Park was very refreshing to me,” said Lee, 46, during an interview held in central Seoul last week. “He is a man who hopes to meet God. He does not deny the existence of God since he is religious, but after going through an unwanted accident [that left his family shattered], he starts to ask where God is and question [all the devastating events that happen in the world].”

The film, which co-stars Park Jung-min, Lee Jae-in and Jin Sun-kyu, centers on money-hungry Pastor Park, who endeavors to expose suspicious religious groups through a profit-oriented investigation. Breaking away from the humble image of a pastor, Park drives a posh BMW and wears expensive clothing.

One religious group that catches his attention is the cult group Deer Mount, which he starts to suspect is related to a string of murder cases that have occurred over the past years. The movie, which is made by a Christian director, pushes audiences to consider how people’s faith in God can be exploited by lunatic religious leaders.

Another main character in the film is a middle school student named Geum-hwa (Lee) who believes her disfigured twin sister is a demon. Despite a doctor’s prediction the “demon” will die soon, the sister, whose birth the family did not even register, has lived well into her teens.

Park plays a member of a mysterious religious cult while Jin portrays a monk who offers leads to the pastor about the mysterious relation between the murders and Deer Mount. 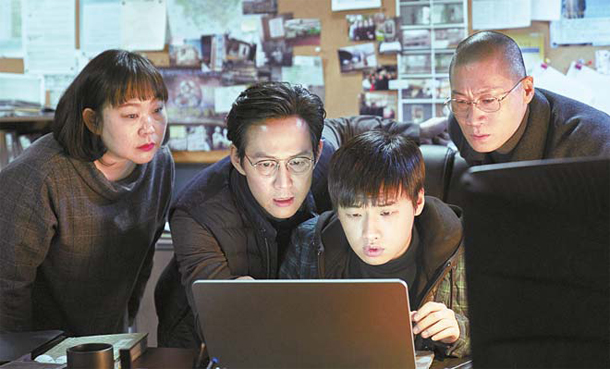 Actor Lee Jung-jae, second from left, in a scene from the mystery thriller “Svaha: The Sixth Finger,” directed by Jang Jae-hyun of “The Priests” (2015). [CJ ENTERTAINMENT]

“This is my first time working on a mystery thriller, and I really enjoyed the experience,” said Lee. Regarding the reason he picked “Svaha,” Lee explained, “The script for ‘Svaha’ stood out from others that I was offered because most scripts I got had me as either a cop or an agent from the National Security Agency, which I thought I had seen multiple times on the big screen. So Pastor Park caught my attention. I wanted to star in this movie, not just because I thought audiences would like to see me in it, but mostly because I thought it would be fun to work on this kind of film.”

Religion is a sensitive topic that can easily trigger controversy. “Svaha” could not avoid it, as a religious cult made complaints to the production company, claiming certain scenes from the film “may damage the reputation of the cult.” Following the complaint, Lee had to rerecord some scenes he narrates right before the film’s press premiere.

Regarding this incident, Lee said, “I think there was a misunderstanding. The scene in the movie does not imply that certain religious groups are misleading. Pastor Park is a very money-oriented person who would poke at anything that could fatten his paycheck. But there can be misunderstandings, and if there is, we have to change it. That scene was not an important part of the movie anyway.”

Some may perceive that “Svaha” is difficult to understand or to accept for those who are atheist, but Lee thinks otherwise.

“The first time I read the script, I thought some people may be repulsed. But after reading it several more times, I realized that it is more about punishing someone who tries to fulfill [his or her] self-interest instead of speaking ill of religious people.” He added, “Personally, I do not think religion is the main focus of this movie. Instead, it is about someone who controls people with faith and makes them do things they may not do otherwise. It is actually closer to a crime movie [with a mix of mystery and thriller].”

Jumping in the thriller genre for the first time, some parts of the role felt awkward for Lee.

“My role has to make people curious [about the suspicions the pastor has about the relation between the cult group and the murders]. So I had to slightly exaggerate my acting while trying to keep the balance of the tone.”

Outside “Svaha,” Lee, again, hopes to get involved in romance films.

“Instead of a person Lee Jung-jae, I want to play a role in a romance title as an actor Lee Jung-jae if there is a good script. But there are not many romance titles these days,” Lee said with a laugh.

Despite the success of such comedies as “Extreme Job” and “Inside Me” so far this year, Lee doesn’t see himself jumping at a role in a comedy any time soon, saying, “I don’t think I have the talent to be in a comedy.”

Rated 15 and above, “Svaha” arrived in theaters Wednesday.