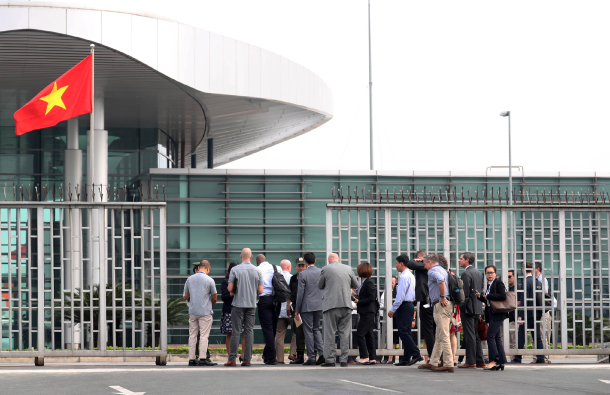 A final round of negotiations between U.S. and North Korean representatives will kick off in Hanoi as early as today, with only a week left until their leaders arrive at the Vietnamese capital for their second summit next week.

U.S. Special Representative Stephen Biegun got on a plane to Hanoi on Wednesday in preparation for the summit, according to the U.S. State Department, while his counterpart from Pyongyang, Kim Hyok-chol is already believed to be in Vietnam. He was spotted at an airport in Beijing on Tuesday.

The pair will face heavy pressure to lay a strong foundation for the second summit between U.S. President Donald Trump and North Korean leader Kim Jong-un’s second summit on Feb. 27 and 28 in Hanoi. Their first summit in Singapore last June was far short of a concrete plan for North Korea’s denuclearization. After months of back and forth negotiations since Singapore, working level talks between Washington and Pyongyang were stuck in an apparent stalemate that was only broken once their leaders agreed to hold another high-profile meeting.

Biegun has since been through a flurry of meetings with North Korean officials in preparation for the summit. He met Vice Foreign Minister Choe Son-hui in Sweden late last month, and talked with his primary counterpart, the North’s Special Representative for U.S. Affairs Kim Hyok-chol, in Pyongyang from Feb. 6 to 8.

The U.S. envoy said after the Pyongyang talks that there was still “some hard work to do” with North Korea until the summit, while the State Department said the talks dealt with “commitments of complete denuclearization, transforming U.S.-DPRK relations and building a lasting peace on the Korean Peninsula.”

Various sources, including a delegation of South Korean lawmakers who visited Washington last week, said that Biegun’s talks in Pyongyang were little more than a confirmation of each other’s positions rather than actual negotiations. 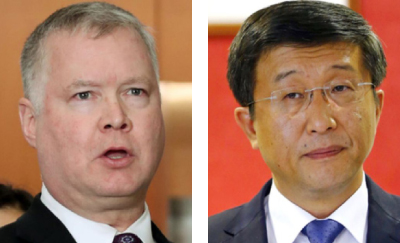 After a briefing on the results of the Pyongyang discussions by Biegun last week, Trump told reporters at the White House on Wednesday that he had “no pressing time schedule” in terms of North Korea’s denuclearization, though it was his ultimate wish.

“As long as there is no testing, I’m in no rush. If there’s testing, that’s another deal,” the president said.

Trump’s notably subdued expectations regarding the process departed from his usual bombastic rhetoric. This has been noted by analysts as indicative of the lack of concrete results in talks so far, which are a growing concern for the high-stakes summit next week.

The State Department did not comment on whether the president’s words showed the United States had no timeline for the North’s denuclearization process, maintaining that it would push for that same goal that it is has focused on in all prior engagements with Pyongyang. “As far as our objectives, nothing has changed,” said U.S. State Department Deputy Spokesman Robert Palladino at a press briefing on Wednesday.

When asked about the possibility that certain international sanctions on the North’s economy could be lifted as possible concessions, the spokesman said sanctions are “something that will continue to be maintained until we’ve achieved our final result of a fully, finally verified denuclearization.”

On an interview with CBS News last week, U.S. Secretary of State Mike Pompeo raised the possibility that sanctions relief was on the table in the negotiations. Pompeo said it is the United States’ “full intention of getting a good outcome in exchange for relieving those sanctions.”

Strapped for time and pressured to reach a deal that can legitimize Trump’s foreign policy gamble with the North, Biegun is likely to find in Hanoi a North Korean delegation equally determined to maximize its gains from the summit - perhaps through sanctions relief and the permission to pursue inter-Korean projects with Seoul.

According to some sources on the ground in Vietnam, the U.S. State Department’s deputy assistant secretary for North Korea, Alex Wong, has already made contact with North Korean officials prior to Biegun’s arrival.

Kim Hyok-chol, a former ambassador to Spain, is widely believed to be Pyongyang’s point man in on-the-ground dealings with the United States, and reportedly well versed in all things nuclear. Mario Esteban of the Elcano Royal Institute think tank, who said he had close contact with Kim Hyok-chol while he was ambassador, described Kim as a man of charisma.

Currently serving in the North’s State Affairs Commission, Kim Hyok-chol was part of a delegation of around 10 North Korean officials led by Kim Yong-chol, the vice chairman of the ruling Workers’ Party’s Central Committee, that visited the White House last month in a diplomatic breakthrough that scheduled the Hanoi summit amid fruitless working-level negotiations.

A diplomatic source who was familiar with the North Korean visit to Washington told the JoongAng Ilbo that Kim Hyok-chol displayed a rather authoritative attitude rarely seen in a diplomat, speaking down to those in a lower position even if they were his elders. Another source in Seoul said Kim Hyok-chol is a fluent English speaker, with both a master’s degree and doctorate in the language, and can also speak Spanish due to earlier studies in Cuba.

A figure in the North Korean negotiation team at Hanoi that is closer to the image of a well-mannered diplomat is Pak Chol, vice chairman of the North’s Chosun Asia-Pacific Peace Committee. Pak gained attention when he traveled to Washington as part of the same delegation as Kim Yong-chol’s right-hand man.

Various people from the South who have contacted Pak during his time as a senior counselor at North Korea’s Permanent Mission to the UN in New York describe him as a considerate and kind figure with excellent English skills.

Analysts say Pak could bring a softer touch to the talks with U.S. officials while Kim Hyok-chol tries to drive home Pyongyang’s position with a more strident approach in something of a “good cop, bad cop” routine. One diplomatic source in Seoul said the personalities of these negotiators would definitely affect the talks but cautioned that in the end, “all of them are marionettes of Chairman Kim Jong-un.”

“All final decisions rest with Chairman Kim alone,” he said.