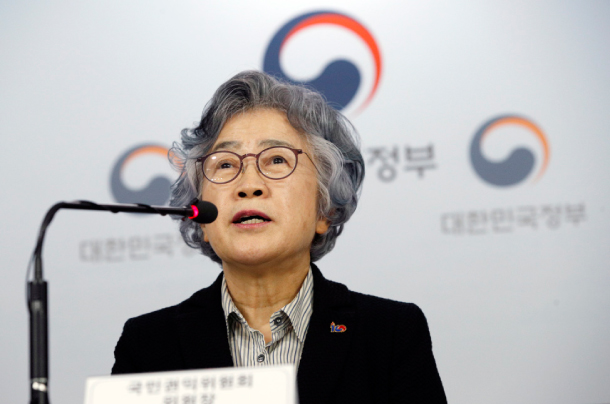 Pak Un-jong, chairwoman of the Anti-Corruption and Civil Rights Commission, announces the outcome of the government’s three-month investigation of hiring misconduct at public companies and institutions on Wednesday. [YONHAP]

Korea’s top anti-corruption watchdog said Wednesday that 182 instances of hiring misconduct were discovered at public companies and institutions nationwide and asked the prosecution to open criminal investigations into 36 of the cases.

At a media conference, the Anti-Corruption and Civil Rights Commission announced the outcome of its three-month survey into hiring 1,205 public institutions nationwide. The survey was conducted in cooperation with the Ministry of Economy and Finance, Ministry of Interior and Safety, Ministry of Employment and Labor and the National Police Agency from November last year until January this year.

According to the commission, 36 of the hiring misconduct cases were considered particularly serious. In 16 of those cases, jobs were given to the family or friends of officials. The prosecution was asked to investigate the 36 cases, which occurred at 31 public institutions.

The remaining 146 cases involved grave errors in hiring processes, and employers were ordered to take disciplinary actions against officials responsible.

A few specific examples were made public to illustrate ethical breaches at some public companies.

In March 2016, the War Commemoration Service Association offered one applicant a job interview, but the interview never took place because the head of the association said the applicant was too young, so the head believed there was a high possibility that the candidate would soon quit for another job.

The Land and Geospatial Informatix Corporation did not hire a child of an employee due to the candidate’s lack qualifications in March 2016. But two months later, the applicant was hired, although the institution was aware of the shortcomings.

A recruiter at a hospital under the Korea Workers’ Compensation and Welfare Service conducted an interview with a relative in April 2012. In another case at the same institution, another recruiter interviewed his friend’s child for a job in March 2012.

In February 2014, Kyungpook National University Hospital hired family members of its employees, although the applicants did not have the required medical professional licenses.

Nine regional institutions were also accused of hiring misconduct. In May 2015, the Gyeonggi Credit Guarantee Foundation adjusted its hiring criteria to allow a child of an employee to be hired.

While some specific cases were made public, the anti-corruption commission said a total of 146 instances of hiring misconduct took place at 112 institutions, without offering further details. The specifics will be announced by each institution after they finalize disciplinary actions.

The commission said 288 incumbent officials, including seven senior executives, were involved in the employment misconduct. Of the seven senior officials, three were immediately relieved from their duties and referred to the prosecution for investigation. The remaining four will face disciplinary actions.

The 281 employees suspected of misconduct will be suspended from their jobs. Their fates will be decided after the prosecution’s investigations or internal probes.

The commission said there are 13 suspected beneficiaries of the misconduct, and they will lose their jobs if the prosecution decides to indict them. Fifty-five are believed to be victims of the rigged hiring process, and they will either be hired or given interview opportunities.

“Even after we conducted a special inspection in 2017, it was unfortunate that we confirmed that the deeply-rooted employment misconduct still remains,” said Pak Un-jong, chairwoman of the Anti-Corruption and Civil Rights Commission. “The government promises to continue its efforts to eradicate corruption and establish fair employment practices.”