When Choo Shin-soo first signed with the Seattle Mariners out of high school in the summer of 2000, his goal was to play just one game among the world’s best baseball players. 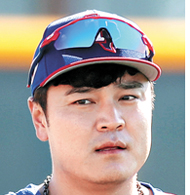 Turn the clock forward to spring training in 2019. Choo, now 36, will be entering his 15th Major League Baseball (MLB) season, and his sixth with the Texas Rangers. He’s also closing in on some personal milestones: the outfielder/designated hitter sits four hits from 1,500th, 32 from 1,500 games and 11 from 200 homers for his career.

Someone of Choo’s age and stature - he was an All-Star last year - could be forgiven for feeling a bit jaded in a league that has gone increasingly more youthful. But Choo continues to be the earliest bird to report to his team’s camp at Surprise Stadium each day, arriving at 5 a.m. to beat everyone by at least a couple of hours.

He still has the exuberance of a kid at a candy store.

“Even today, I love training with and facing the best baseball players of the world,” Choo said. “When I first arrived in the U.S., my goal was to play just one game with these players.”

Choo said he hadn’t been paying attention to his personal stats and had only been informed of late by the media that he was approaching his 1,500th career hit.

“I’ve accumulated these numbers because I’ve been playing for a long time, but I don’t think I am a special player,” he said. “I haven’t even had 200 hits in a season. But I’d be curious to find out just how far I can go.”

Wednesday was the Rangers’ team photo day. And before the photo shoot, Choo had already done his stretching and weights.

Though the starting time for daily practices has been pushed back under new manager Chris Woodward, Choo said: “I still show up early in the morning. It’s hard to change something I’ve been doing for so long.”

A veteran like Choo can set a good example for younger players by putting in those long hours at camp. And Choo does understand he has to fill the leadership void following the retirement of Adrian Beltre after 21 seasons.

“No one can replace Beltre, and a group of several players, not just one guy, will have to step up and be responsible leaders,” Choo said. “I want to make my contributions on and off the field. I want to lead by example the way I’ve been doing all along.”

Choo had his first live batting practice of spring Wednesday. He said he wants to make a couple of subtle changes to his mechanics, though it’s too early to go into specifics this early in camp.

Choo has had some health problems over his career. He missed 16 games last year and said a thigh injury he suffered in the first half continued to bother him in the latter half.

That explains the huge discrepancy in his splits: Choo batted .293 with 18 homers in 90 games before the break but managed only a .217 batting average and three home runs in his final 56 games.

“I couldn’t practice during the five weeks when I was dealing with the pain. I only played games,” he said. “During the physical last week, I spoke with our trainer about this issue. I’d like to have a different result this year.”