Suwon hopes to return to the top of K League 1

Suwon hopes to return to the top of K League 1

With the 2019 K League 1 season fast approaching, the Suwon Samsung Bluewings are hoping for a return to the good old days this year. 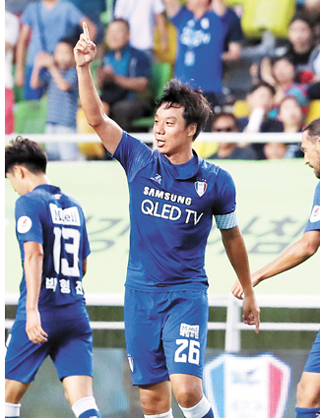 Although it’s been years since Suwon won the K League title, it was once considered an elite club in Korea. Looking at the past five seasons, Suwon had two runner-up finishes - in 2014 and 2015 - and a third-place finish in 2017. Although it had a disappointing seventh place finish in 2016, it still managed to win the Korean FA Cup that year.

But last year was a different story. Suwon had a strong first half of the season, finishing toward the top of the leaderboard, but started to struggle after the mid-season break. Things went so wrong that Seo Jung-won, Suwon’s head coach at the time, briefly resigned from the team, although he ended up returning not long after. The team ultimately finished sixth in the 12-team league and was eliminated in the semifinals of the 2018 Asian Football Confederation (AFC) Champions League (ACL).

As Suwon, the four-time K League Champion, was once considered the best team in the league, 2018 was a season of disappointment. Going into the 2019 season, it’s the Jeonbuk Hyundai Motors, that has won four of the last five titles, not the Bluewings, that is expected to lift the trophy.

Ulsan Hyundai FC has also strengthened its roster this year by signing more players, and is expected to be another strong team that Suwon will have to overcome if it wants to return to its former glory. Gyeongnam FC, who finished as runner-up last season, will also be looking for its own shot at glory.

Despite the obvious obstacles, captain Yeom Ki-hun is determined to lead Suwon back to the top of the K League 1. Yeom remembers Suwon’s glory days - he’s played for the team for eight years - but last year he also struggled to perform.

“Last season felt very empty,” Yeom said. “We kept up a good performance until July or August, but we just suddenly lost our pace at the ACL, FA Cup and in the league.”

However, as Suwon had such a disappointing season last year, Yeom said he doesn’t feel as much pressure compared to previous years.

With less pressure, Yeom and the players are working harder than ever for the upcoming season under new head coach Lee Lim-saeng. The addition of younger players has made Yeom’s role all the more important.

“I think the veteran players will have to be good examples,” Yeom said. “Actually, I’m gaining energy from watching the confidence of younger players. Our fans’ support is important this season. Rather than criticism, I really ask [the fans] to encourage the younger players.”

Suwon will open their season with a match against Ulsan Hyundai FC at Munsu Football Stadium in Ulsan at 4 p.m. on March 1.