Korean workers who set aside just 200,000 won ($177.70) to spend on vacation this year may be able to get their travel budgets doubled if their company takes advantage of a expanding government initiative. The Korea Tourism Organization, alongside the Ministry of Culture, Sports and Tourism, is currently offering employees of small- and medium-sized companies a chance to double their travel budget when the employees and their companies apply for a chance to win the travel promotion by March 8.

This promotion, which was first introduced last year, has companies pay 100,000 won and the government another 100,000 won, creating a total budget of 400,000 won for employees. It was created to encourage people to travel within the country and bolster the local tourism industry.

Companies consult their employees and then apply to the government with the number of interested workers. About 80,000 people will be granted the additional travel budget this year, four times more than last year. If there are more applicants than spots available, the government will have a computer system randomly select companies. The list of companies chosen will be announced in mid-March. 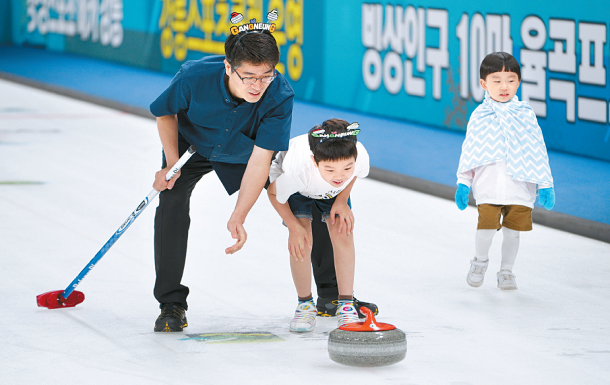 A family plays at an ice rink in Gangneung, Gangwon, where curling lessons by professionals were offered. [KOREA TOURISM ORGANIZATION]

The 400,000-won budget can be used from April to next February on the government-run Benepia website where offers from different travel agencies are posted. Stays at hotels or resorts, tickets for trains and buses, or packaged tours are available at the site.

“The quality of travel options has greatly improved,” said Baek Man-seong, deputy director at the Korea Tourism Organization’s tourism welfare team. “The total budget for a family in general could exceed 400,000 won, but when considering the discounts they can get, people tend to look for higher quality products when planning a trip.”

Since it is the company that has to apply for this promotion, the government provides additional benefits to companies to motivate them. They can gain additional points when applying for a government-commissioned project, and sometimes receive better interest rates for loans borrowed from local banks.

There are four different categories available on the website: places to stay, tickets for major tourist destinations, transportation and packaged tours. At the moment, about 70 to 80 percent of the reservations made on the website are for booking places to stay. To make options more diverse, the state-run travel agency is talking with regional governments and their travel department to provide unique experiences that are not offered by others. Last summer, the tourism organization talked with Gangneung, Gangwon, and offered curling lessons to about 200 tourists followed by city tours. Similar types of programs will be posted on the website as they are set throughout the year.

Employees at small- and medium-sized companies can receive monetary benefits to plan their vacation any time they would like, thanks to a new promotion from the Korea Tourism Organization designed to bolster local tourism. Packages offered include programs like sledding in Gangwon, left, walking in a forest near Woljeong Temple also in Gangwon, as well as the chance to see rape flowers in Jeju. [NEW1, JOONGANG ILBO, YONHAP]

Based on an online survey the tourism organization conducted last year, 87 percent of respondents who visited the Benepia website said they feel they can use vacation days whenever they want, not only when the company asks them to, a major change from the past.

“Since the company takes the lead to provide this benefit to employees, workers say that they feel less awkward about requesting vacation days.”

The tourism organization forecasts that more people will apply for the support this year, which will push the state-run agency to secure a greater budget to cater to more people next year.