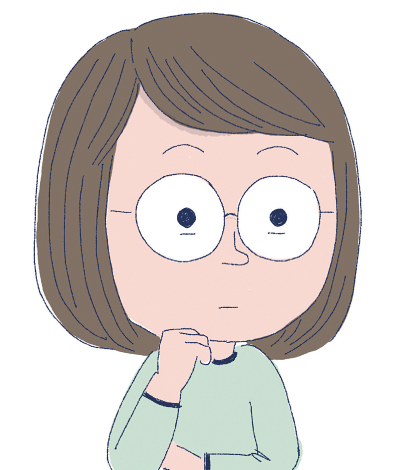 The idea of marriage conjures up images of two people coming together to form a family of their own in a matrimonial bond - but that’s not always the case in Korea. Here, more often than not, rather than the birth of a new family, marriage means the incorporation of the wife into the husband’s family; meaning the daughter-in-law becomes a new and subordinate member of her husband’s family, but not vice versa. 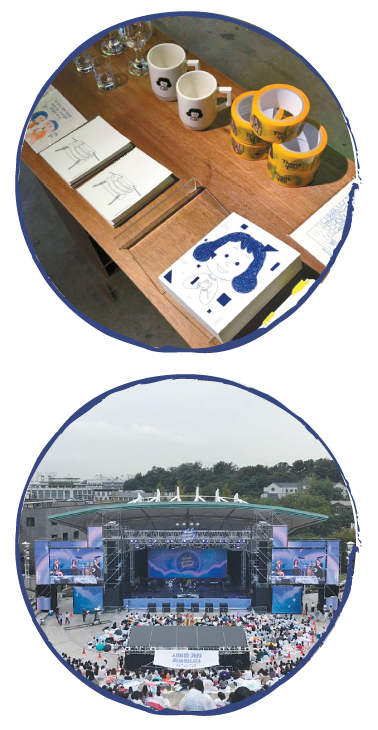 Top: Author Soo Shin-ji held exhibitions with “Myeoneuragi” in Hongdae, western Seoul, in August. Above: Soo gave a talk at a festival at Yonsei University in September. [SOO SHIN-JI]

A myeoneuri, as daughters-in-law are referred to in Korean, may have been a complete stranger to her husband’s family for decades, but she is expected to willingly surrender herself to her husband’s family and help her mother-in-law take care of household chores and ceremonies. When the newlywed couple visits her husband’s parents, she, the myeoneuri, should put on her apron upon arriving, enter the kitchen and begin cooking the meal. She readies dessert and washes the dishes while the others chat in the living room.

During holidays, like the Lunar New Year (Seollal) or Korean Thanksgiving (Chuseok), the couple is expected to visit the husband’s family first, sleep over for at least a day and then visit the wife’s family afterward. If the man comes from a more conservative family, then it’s often the case that the couple completely skips meeting the wife’s side of the family. Even on non-holidays, the myeoneuri is expected to call her parents-in-law and check on them regularly.

While it may seem like something that can’t possibly happen in the 21st century, many, if not most, married women in Korea find themselves in the exact same position. Reflecting such experiences is Soo Shin-ji’s web comic series titled “Myeoneuragi,” which has become enormously popular among women in recent years.

The web comic series began in May 2017 on Facebook and Instagram, revolving around the female protagonist Min Sa-rin and her newlywed husband Mu Gu-young. The webtoon begins with Min and Mu’s wedding, then gets right to revealing the issues that have always been there in the past, but have not been properly recognized. The strong and concise message - that Korean women still suffer from day-to-day inequality - is delivered through cute characters and simple lines that are easily heard in their real lives.

The first episode begins with Mi-young (Gu-young’s younger sister) telling Sa-rin that she should make a meal for Gu-young’s mother’s birthday instead of eating out. Sa-rin tells Gu-young that they should go to his parent’s place a day earlier so that she can get up early in the morning and prepare a birthday breakfast to “score some points.” In the second episode, the day of the birthday, Gu-young fails to wake up to prepare the breakfast with Sa-rin, but she makes the breakfast for everyone else anyway.

“I actually started this work very lightly,” said Soo. “But as I went along and saw how people reacted to the episodes, I realized that it was a bigger problem than I had thought. I myself in the past hadn’t been aware of issues [regarding sexist discrimination], but I learned through people’s comments and reactions that it was anything but small.” 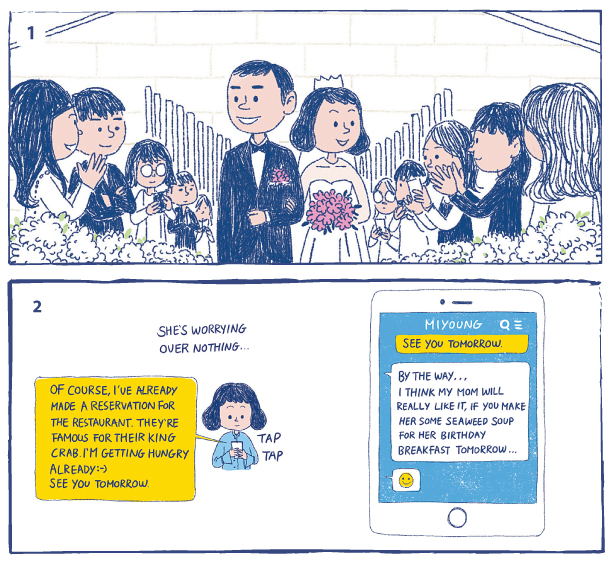 Soo recently began translating the original Korean series into English through her Instagram account “min4rin” to reach out to a bigger audience. The English version of the webtoon is now in its second episode and the author has faced difficulties in trying to express the subtle subtexts that Koreans know without explanation but that must be explained to foreign readers, especially considering how the web comics are written with concise and short lines. Nevertheless, she is determined to get her work across to those unfamiliar with Korean culture.

Soo met with the Korea JoongAng Daily to discuss her work, her recent English translation and her hopes of helping the younger generation root out the sexist traditions in Korea through her work. The following are edited excerpts. 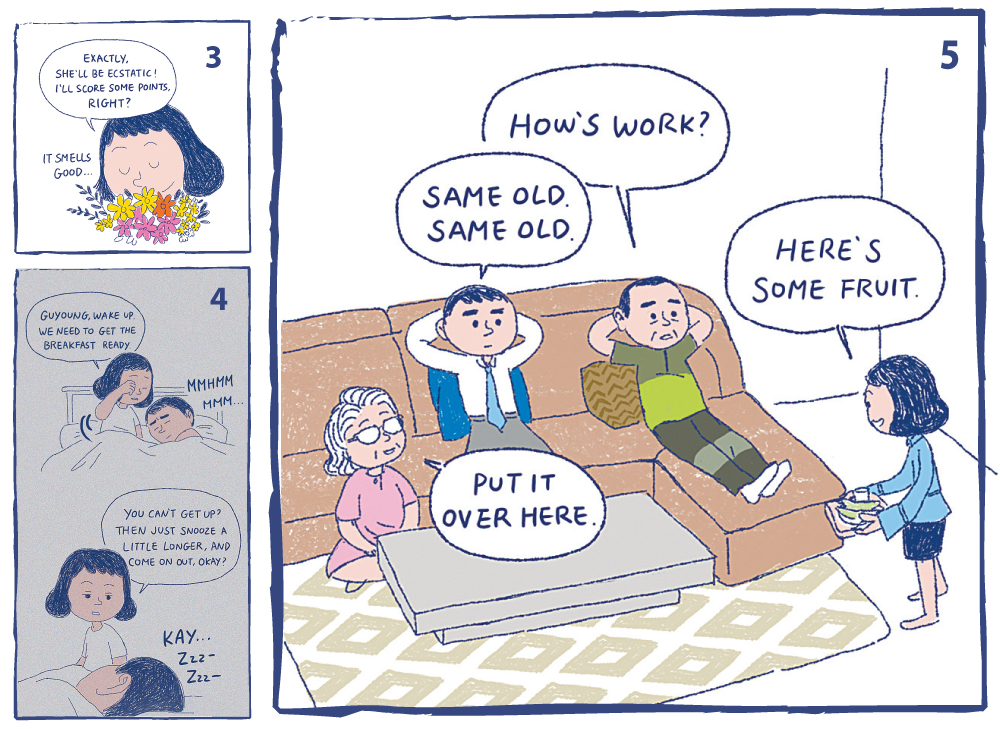 3. Sa-rin does so to “score some points” with her mother-in-law. 4. Mu-young fails to wake up on the day of his mother’s birthday. 5. Sa-rin gets fruits ready at her parents-in-law’s house. [SOO SHIN-JI]

Q. What was your job before you began “Myeoneuragi” and how did you come to start the series?

A. I have been working as a children’s books illustrator for over 10 years and that’s still my main profession. “Myeoneuragi” is my third cartoon and it deals with the things that I have heard and felt during my whole life [as a Korean woman], especially regarding the things women go through after they get married. I did a lot of research to make the story as realistic as possible, but, to be honest, I really didn’t need to because I had already lived all those things myself. It is a story of all our experiences.

I have received so many messages and comments from female readers, telling me their own experiences that were similar to that of Sa-rin. But it was actually surprising to see divided reactions from female readers. The difference wasn’t necessarily because of the generation gap, but because of the different situations the readers were in. While a lot of single women commented that they wanted to see Sa-rin get divorced, married women tend to say that getting divorced is a lot easier said than done, because there are so many other things to take into consideration. I think young unwed women thought that Sa-rin’s situation was reflecting themselves, and they didn’t want to surrender to such inequality.

I got hardly any reaction from men, never mind harsh criticism (laughs). There were not many men who finished the whole series; and when I asked those people who did finish the work, they told me that they “didn’t know how to react.”

Have you always thought about feminist issues?

Actually, I was really ignorant about feminism and sexism before - so much so that you’d be surprised. In one of my previous cartoons, I used derogatory terms about women as a joke in a work called “Street Painter.” And when the readers criticized me for it, I even thought that they were being uncomfortable over nothing. But when people kept pointing it out, I began to think that I may have been wrong. That’s when I opened my eyes.

And was that the main reason you began the series?

Yes; I also spend time reading what people write online and was really surprised to see that young women were still struggling with the same sexist problems as decades ago. Things like, does a couple need to visit the man’s side of the family first? Does it always have to be the woman who washes the dishes? People naively believe, or hope, that things can change in a way that makes everyone happy, where no one gets disappointed.

These prejudices and traditions are so deeply rooted, that even if we try to deny their existence, they end up feeling natural at certain points in our lives. So a lot of married women say that it is too late now, and that there aren’t any ways that the situation can change without someone getting harmed. At the same time, they say that they wish their daughters wouldn’t go through the same things as they did. Men, on the other hand, ask women to “just bear with” the situation, because they feel comfortable in it. I think the word “just” says a lot.

What reactions do you expect from the foreign readers? Why did you start the English versions in the first place?

Well, because there was no reason I shouldn’t. Apart from that, I wanted to see how foreigners would react to our problems. It was really interesting to see the comments on the Korean version, and I think it will be the same in English, too. But it hasn’t gotten much attention abroad yet, so I think it may be too early to say what I expect. I do imagine that it will be easier for them to look at the situation more fairly from their third-person perspective, and I look forward to hearing their thoughts on it.

What are some difficulties that you faced in making the English version?

There are so many subtle inequalities that are hard to get across to foreign readers without explanation. For instance, it’s natural for a married couple to visit the man’s side of the family when it comes to national holidays, like Seollal or Chuseok, but that has to be explained to foreign readers.

And there are the name problems. Sa-rin refers to Mi-young by her name in English, but in Korean, she has to call Mi-young agassi - which could probably be translated closest to “Miss”; and the word “mother” that Sa-rin calls Mu-young’s mother possesses a different nuance in Korean. So we’re trying to figure out a way in which we can get all these meanings across, without making it like writing a doctoral thesis (laughs).

Sa-rin doesn’t divorce Gu-young after he swears he will change at the end of the series. Yet in the epilogue, Gu-young doesn’t seem to have actually changed much: why did you finish it off like that?

Because you really don’t know what’s going to come in the future. “Myeoneuragi” doesn’t actually have much of a storyline. Yet the reason I chose to talk about it through a cartoon is because it’s an analogue form of content that you can enjoy on a digital device. People get to choose how much time they will spend looking at a cut of the cartoon. And when they do spend time and linger on a certain line or a scene, then it begins to sink in - it may not become an immediate remedy, but it provides room for thought.