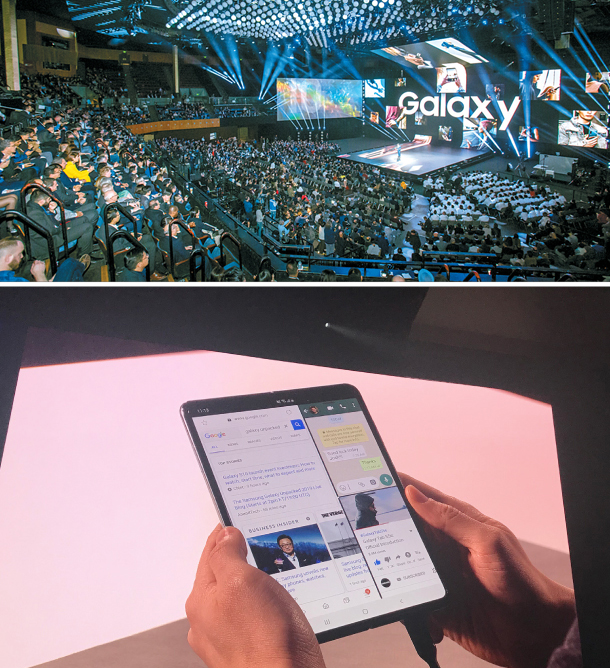 Top: Samsung Electronics President of IT and Mobile Communications Koh Dong-jin introduces the Galaxy Fold at an unpacking event in San Francisco Wednesday. Above: A Galaxy Fold with three apps open on the main screen. [YONHAP]

The Galaxy Fold was unveiled at the Galaxy Unpacked event in San Francisco on Wednesday along with the new Galaxy S10 series.

As hinted in November, the foldable phone opens like a book to transform into a 7.3-inch display tablet. The cover of the phone - the front when it is folded - is a 4.6-inch screen that works like a conventional smartphone.

Although, when folded, the device is slightly narrower than most smartphones, the wider main screen inside offers an optimized user experience for entertainment and multimedia content like games and videos. Users can simultaneously use up to three different apps on the screen, with one main window and two smaller ones beside it.

The Galaxy Fold is able to seamlessly transition from the cover screen to the inside screen, a feature Samsung calls “app continuity.” The example used at the demonstration was Google Maps: The inner main screen showed an identical map in the same location and scale as what was shown on the cover display before it was opened.

The inside of the device is one large foldable screen, not two screens arranged side-by-side with a thin crack between them. To realize this, Samsung developed a display that is 50 percent thinner than what’s used on conventional smartphones.

“Galaxy Fold breaks new ground, not just because it defines categories but because it answers to skeptics who said everything possible has been done; … that smartphones are a mature technology and a saturated market - we are here to prove them wrong,” said Samsung President Koh Dong-jin, head of the company’s IT and mobile and communications division, at the Unpacked event.

The device comes with a total of six cameras of between 8 and 16 megapixels: one on the front cover, two inside and three on the back. Batteries on each side of the phone provide a capacity of 4,380 ampere hours (mAh), larger than the latest phones from its high-end rival Apple.

The screen is not the only thing that’s big with the Galaxy Fold. Its price tag is a whopping $1,985, a figure unseen even among high-end smartphones. Sales in the United States will start in April. Koh told reporters after the show that the product is likely to launch in Korea the following month.

The release of the foldable phone this year falls in time with the Galaxy brand’s 10th anniversary. After peaking in the early 2010s, Samsung’s smartphone business has been shrinking in recent years, cornered by the rapid rise of Chinese phone makers and changing consumption patterns as people keep phones for longer.

“If the Samsung foldable phone succeeds to ‘wow’ consumers and provide constant upgrades on the user experience, the product will be able to create new demand in the global market as it differentiates from iPhones and Chinese smartphones,” said analyst Kim Dong-won of KB Securities.

Local analysts project that Samsung will produce around one million Galaxy Folds this year. Another analyst who requested anonymity agreed that the Galaxy Fold is significant as it opens a new market but added that it will take some time for the model to lead to actual profits.

“It’s new technology, so the manufacturing costs will remain pretty high,” he said. “In terms of profits, the performance of S10 is what counts.”

The Galaxy S10 unveiled at the same event will come in four models of different sizes. One of them, the Galaxy S10 5G, is Samsung’s first phone that supports 5G connection. All the devices have an “Infinity-O” AMOLED display with a hole cut in the corner of the screen for the front camera.

Prices were set at a maximum $999 for the S10+, slightly cheaper than the latest iPhones. The price of the 5G phone was not disclosed.