‘Vietnam has both good and bad lessons for North Korea’

‘Vietnam has both good and bad lessons for North Korea’ 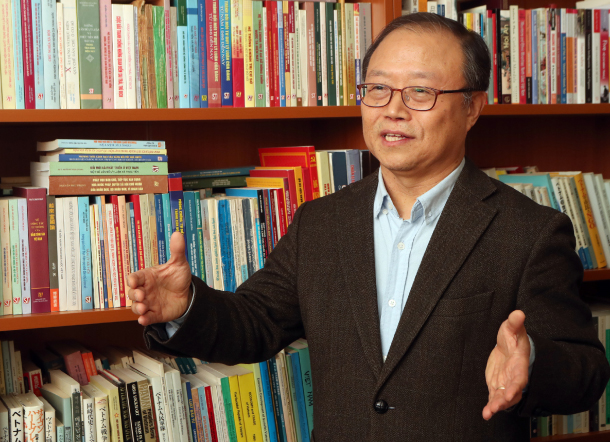 After Vietnam was chosen as the venue for the summit between North Korea and the United States, many are curious whether Chairman Kim Jong-un thinks of Vietnam as an economic model. Lee Han-woo, a well-known expert on the renovation process of the Vietnamese economy, tells us that North Korea can learn from Vietnam’s Doi Moi policy and build its own economic prosperity. Doi Moi, officially adopted in December 1986, means reform in English. It is summed up as economic growth policy that uses open-door principles and introduction of market elements into socialist system.

The possibility that Chairman Kim thinks of Vietnam as its model is high. Secretary of State Mike Pompeo already has urged the North to achieve economic prosperity like Vietnam by normalizing the relationship with the United States as he met with Chairman Kim Jong-un on July last year. What’s more, analysts predict that as for North Korea, it would pay more attention to Vietnam, which is relatively similar, rather than dissimilar China.

Lee, as an expert who looks deeply into the renovation of the politics and economy of Vietnam, emphasizes that in order to see if the Vietnamese model is applicable to North Korea, it is necessary to look at the big picture, including the beginning of the Vietnamese renovation and open-door policy, its progress, achievements and limitations.

First, he explained how Vietnam reformed its economy by solving the agricultural sector and started to grow as it improved its relationship with the United States.

Despite its remarkable economic success, the competitiveness of Vietnamese companies is still low. Rather than following the Vietnam model as it is, North Korea has to know the limitations of the model and earn legitimacy by improving the lives of the people to prevent instability.

JoongAng Ilbo had an interview on Feb. 12 with Lee Han-woo, a professor at the Institute for East Asian Studies at Sogang University, at his office.

Q. What difficulties did the Vietnamese economy face when the country declared Doi Moi?

A. Vietnamese leaders had strong confidence in building the nation after they achieved unification in 1975. However, this confidence disappeared as the economy ran into a brick wall. The goal of the five-year economic growth plan that started the year after unification was to grow by 13 to 14 percent annually. Yet the economy only grew 0.4 percent.

While the northern industries were not competitive enough, the southern factories’ operation rate plummeted due to the pullout of foreign capital. The most serious field was agriculture. Although Vietnam was an agricultural country where it is possible to raise two crops, even three crops a year, it had no choice but to import rice.

Is it because of the inefficiency of a socialist economy?

At that time, farmers were earning two-thirds of their revenue outside of the communal farm, namely cooperative. It clearly shows how inefficient the communal farm was. As agricultural production was low, in the late ’70s, in the northern part, illegal product contracts between local executives and farmers were rampant. Local executives distributed land for a short period of time to farmers. When the farmers only gave the contracted amount, the rest was the farmer’s. In the southern part, the farmers resisted against communal farms. On account of the farmers’ desire to keep private farms, the government had a hard time purchasing agricultural products and supplying food to the city even became harder.

In order to deal with this situation, in the 1980s, a new partial reform policy was implemented, but the effect was ephemeral. So to bring the wealth accumulated from the private sector to the public sector in the process of partial reform, the government conducted a currency reform, but it brought about serious inflation of 600 to 700 percent. Eventually, the government had no choice but to admit the problem of managing the economy through a centralized system and began to contemplate a complete renovation.

The politics of the international world might have also influenced the change.

China’s reform and open policy starting from 1978 stimulated Vietnam. Vietnam emphasizes the originality of its reform and opening model, but from a larger point of view, the directions the two countries are heading are the same. Similar reform policies came out at seven- to four-year intervals. Vietnam pushed forward post-socialism, but at the same time, it had to transform southern Vietnam into the socialist system. Because of this contradiction, the progress was slow.

Perestroika, Gorbachev’s policy to reform socialism in the 1980s, also acted as an impetus to introduce reform policies. The remarkable economic development of the four Asian Tigers, including South Korea, Taiwan, Singapore and Hong Kong, was also a stimulant. At that time, Vietnam was highly interested in Korea as it published an internal report on South Korea’s economy by assembling the academic articles of Korean economists.

From where did Vietnam start?

Many say the success factor of Vietnam’s reform was foreign investment, but we need to pay attention to the internal reforms. In the agricultural sector, it phased out socialism. Farmland was distributed to people according to the number of family members, and the government allowed farmers to use the land for a long period of time. Farmers could use rice paddies for up to 20 years and mountains for 50 years. The government owns the land, but the farmers had the right to inherit, mortgage, and transfer the land. This is actual privatization.

As these measures created achievements, the supply of food started to stabilize and it transformed into a rice-exporting country in 1989. Vietnam started the reform by solving the problem for ordinary people making a living. The reform for companies started in the 1990s. The state-owned companies, which amounted to 12,000, were halved by registering the companies again. After this, the government made state-owned companies into stock companies and it owned a part of the share.

The most outstanding part is the industrialization strategy through attracting foreign capital.

After Vietnam declared Doi Moi, foreign capital did not come in immediately. The capital gradually increased as a new investment law was implemented in 1988, but the critical variable was the United States. As the United States permitted the International Monetary Fund to lend funds again to Vietnam, the development funds rushed in. Until then, Vietnam was under the influence of U.S. sanctions because of the Cambodia invasion in 1978. Only after Vietnamese troops withdrew from Cambodia in 1989 did the situation got better. After this, the United States lifted the economic sanctions in 1994 and Vietnam established diplomatic ties with the United States in 1995. This series of events allowed foreign capital to flow through Vietnam.

Every renovation causes pain. Yet, in Vietnam, it seems like opposition from the conservative party and requests for democratization from the public were not hugely problematic.

How would there not be any pain? Yet the power struggle was expressed after being filtered within the party. The change came from leaders in the Communist Party in the ’80s which consistently insisted to reform after having a war with France and the United States. As the economy got more difficult, practical way of thinking in terms of reform emerged. In particular, Truong Chinh’s role was remarkable.
He became the general secretary right before the sixth party congress in 1986. He was known as a left-winger and was also known as to uphold the values that Mao Zedong pursued, but changed his mind due to the serious economic situation and became a reformist. After his predecessor Le Duan passed away, who was a conservative, he took over the position and created the foundation to adopt the market economy. The request for democratization from the public is currently not taking place that much domestically, since the dominating power of the police and military are very strong.

The accomplishments of the renovation are remarkable. Nevertheless, it seems that both problems and tasks will remain.

The GDP per capita, which was under $100 when the Doi Moi started, became $2,587 last year. According to purchasing power parity, it is close to $8,000. The foreign trade increased 150 times more than before. The rate of poverty also fell from 60 percent to 10 percent. But there is not only a bright side. The biggest problem is that the vitality of foreign investment is not connected to the domestic economy. Foreign investment companies control 70 percent of Vietnam exports.

Samsung, the biggest player in the Vietnamese market, accounts for 25 percent of the exports. However, the competitiveness of local subcontractors including the supporting industry does not live up to expectations. It is different from South Korea’s economic model, which fostered domestic companies under the government’s strong protectionist policy.

Ultimately, what is important is whether Vietnam’s growth model could be applied to North Korea.

The country has to solve the very problem of survival — people making a living. It has to carefully observe that Vietnam dealt with the agricultural problem first. Vietnam’s productivity rose as it made the unit of production and distribution as individual households, not communities. It is urgent for North Korea to transform from a policy that distributes land from the communal farmland to a policy that allows the privatization of land.

North Korea has recently started to reform the agricultural sector by implementing a policy that allows people to grow crops by dividing the land according to small units within the group.

In the end, North Korea has to allow households to manage land. Many say that foreign capital is important, but stabilizing the supply of the agricultural sector is the foremost task. The success behind the agricultural reform of Vietnam was good climate conditions, to the point where growing crops twice and even three times a year was possible.
For North Korea to overcome the unfavorable climate condition and succeed in agricultural reform, the role of cooperatives is crucial. It needs to elevate the productivity of its crops by supporting the farmers. For example, it needs to provide farming resources like pesticides and seeds and organize irrigation facilities.

If the negotiations with the United States go well and North Korea pushes ahead with reform and opens its door to the world, will foreign capital flow through North Korea?

The competitiveness of North Korea’s industry will be key.

Attracting foreign capital is crucial, and of course it should be done. However, if North Korea relies on economic growth oriented to foreign investment without the development of domestic industry, there will be limitations in building a strong economy. North Korea has to put effort into fostering small- and medium-sized companies that can cooperate with big foreign investment firms. In this regard, the role of South Korea, which will be the center of investment to North Korea in the future, is essential.

Will there be any possibility of political instability in the process?

It depends on what kind of achievements the North Korean leaders show the people. The reason why the reform by Vietnam was carried out with stability was because people’s lives had become better. This is the so-called performance legitimacy. The power of overcoming the long-held outrage over corruption and the one-party ruling state came from this economic achievement as well.