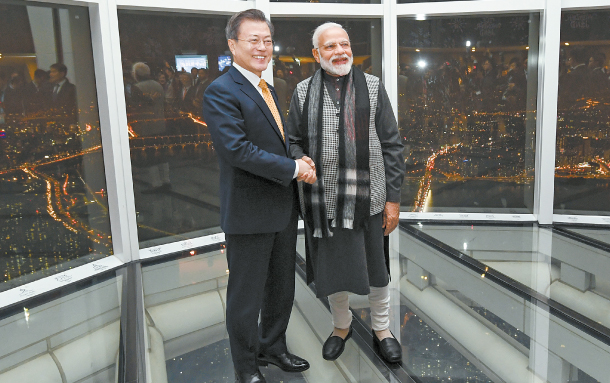 Indian Prime Minister Narendra Modi vowed to more than double his country’s bilateral trade with Korea by 2030 after arriving here for a state visit on Thursday.

Modi will meet with President Moon Jae-in for a summit today at the Blue House.

The summit is scheduled for this morning, and the leaders of Korea and India are expected to discuss peninsular affairs and ways to strengthen bilateral ties.

With his visit, Modi became the first leader of a foreign country to travel to Korea in 2019 on a state visit. It reciprocated Moon’s own state visit to India in July 2018. The last time Modi came to Seoul was in 2015.

Shortly upon his arrival in Seoul on Thursday, Modi attended a business symposium at Lotte Hotel Seoul, central Seoul, in which some 500 participants from both countries discussed industrial cooperation and India’s electric vehicles.

Attendees included Kong Young-woon, the president of strategy at Hyundai Motor, who doubles as the chairman of the Korea-India Economic Cooperation Committee; Sung Yun-mo, minister of trade, industry and energy; and India’s ambassador to Seoul, Sripriya Ranganathan.

In his keynote speech, Modi stressed bilateral cooperation for the fourth industrial revolution. He even took a stab at Korean, reciting an old proverb that goes, “If you want to go quickly, go alone. If you want to go far, go together.”

The Indian prime minister continued that it was his goal to establish a joint India-Korea start-up center to boost communication and cooperation between the two countries, adding that they could both create synergy if they work within an institutionalized framework. Modi also vowed to increase bilateral trade more than two-fold over the next decade, from $21.5 billion last year to $50 billion by 2030.

Kong from Hyundai Motor replied that the two countries could create the world’s best start-up ecosystem if the Korean companies’ technology and young peoples’ creative ideas are combined with India’s innovative start-up environment.

Modi’s first appointment with Moon came later that day when they met at Yonsei University in Seodaemun District, western Seoul, to attend the reveal of a bust sculpture of Mahatma Gandhi, the Indian activist who led the country’s independence movement against British rule in the early 20th century.

The sculpture was donated by the Indian government, which has been commemorating the 150th anniversary of Gandhi’s birth this year by erecting Gandhi statues overseas.

Moon said during his congratulatory speech that “big progress” was being made in peace on the Korean Peninsula, and said he hoped Gandhi’s spirit lives within the hearts of Koreans forever.

Moon cited quotes from Gandhi, saying “Be the change you wish to be” and “There is no path to peace. Peace is the path.”

Moon and Korean first lady Kim Jung-sook had dinner with Modi on Thursday evening at a traditional Korean restaurant on the 81st floor of Lotte World Tower in Jamsil, southern Seoul.

Modi was expected to visit the tower’s observatory deck and greet visitors there. The Blue House explained that Lotte World Tower was chosen as the dinner venue because Moon’s office wanted to show Korea’s modern side to Modi. The restaurant offers a sprawling view of Seoul at night.