Trump says Hanoi summit with Kim won’t be the last

Trump says Hanoi summit with Kim won’t be the last 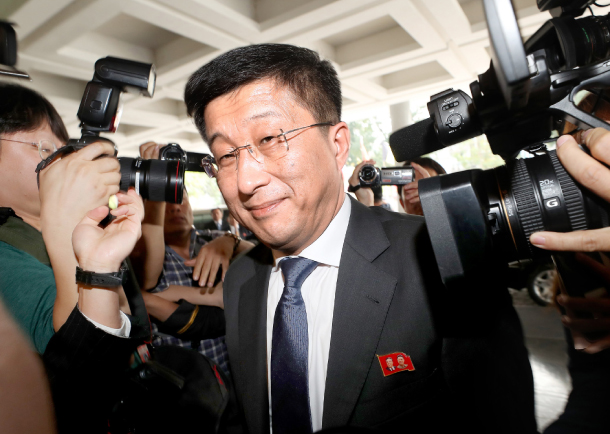 U.S. President Donald Trump on Thursday said his upcoming meeting with North Korean leader Kim Jong-un in Hanoi, Vietnam, next Wednesday would not be their last.

His comment has fueled speculation that the second summit would yield little progress on the North’s denuclearization.

“We’ll be meeting with Chairman Kim for two days and I think we’ll accomplish a lot,” Trump told reporters at a meeting with Austrian Chancellor Sebastian Kurz at the White House. “I don’t think this will be the last meeting by any chance.”

In his usual off-the-script manner, the president said that he would “love to” remove a host of U.S.-led international sanctions on the North’s economy, but added that Pyongyang would “have to do something that’s meaningful” in return.

The upcoming summit in Hanoi is slated to be longer and more involved than the two leaders’ first meeting in Singapore last June, with Trump adding he would be enjoying an evening banquet with Kim this time. The stakes are also higher than before, given that no concrete results emerged from the last summit.

U.S. negotiators, led by Special Representative for North Korea Policy Stephen Biegun, are currently on the ground in Hanoi hammering out the final details of an expected agreement to come out of next week’s summit. Analysts have cast doubts whether Biegun will be able to strike a major deal with the North’s envoys given the reportedly underwhelming results of his earlier meetings in Pyongyang this month.

Trump’s remarks on Thursday reinforced skeptics’ views that his negotiators have had little success in drawing out major steps towards denuclearization from North Korea.

On Thursday, South Korea’s presidential office tried to deflect such concerns, saying Trump’s words were not meant “to intentionally lower expectations” for the Hanoi summit. The United States and the North will continue to hold discussions at various levels, Blue House spokesman Kim Eui-kyeom said, “because the process must take place in steps that will take a long time.”

Seoul’s defense of the U.S. president’s remarks can be seen as an attempt by South Korea’s to demonstrate that it remains coordinated with Washington as dialogue with North Korea continues.

According to CNN, White House National Security Advisor John Bolton will travel to Seoul later this week to consult on the process with the South’s officials. He will presumably also relay the results of Biegun’s negotiations.

It is noteworthy that Bolton, a notable critic in the Trump administration of engagement with Pyongyang, has been tasked with coordinating with Seoul’s pro-dialogue Moon Jae-in administration.

Nonetheless, it is unlikely Bolton would act in a way that contradicts the administration’s approach to the talks, especially as Trump has remained optimistic about the results of the summit next week.

With regard to the summit, a source in Seoul familiar with the ongoing preparations told reporters on Thursday that Kim Jong-un would likely not spend much time on side activities like touring industrial facilities in Vietnam while on his summit trip and will focus on his bilateral talks with Trump. Earlier reports suggested Kim would meet with the Vietnamese president and visit sites around Hanoi, as he did in Singapore.