Georgian envoy extols the wines of his nation

Georgian envoy extols the wines of his nation 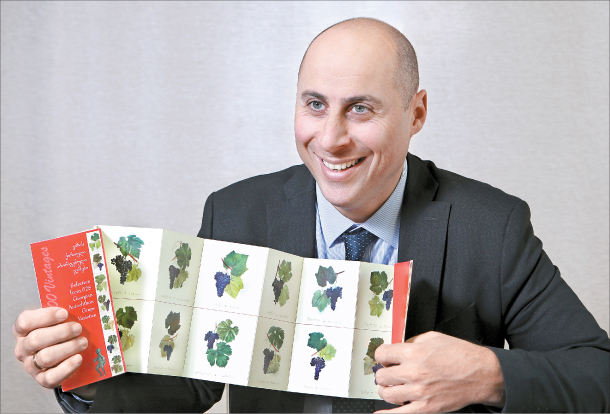 Ambassador of Georgia to Korea Otar Berdzenishvili speaks about the more than 500 different types of grapes used to make wine in Georgia during an interview with the Korea JoongAng Daily on Feb. 14. [PARK SANG-MOON]

“It takes time,” said Berdzenishvili. “You have to smell it, take a sip, think about its structure, then give it some time before you try it again.”

Celebrating the intangible cultural heritage of Georgia, the Embassy of Georgia in Korea is hosting a special evening on wine at the Somerset Seoul hotel today.

“The white wine that will be presented at the event is quite unique,” said the top envoy from Georgia. “And what I’ve noticed is that certain Korean cuisines go very well with it, like the roe bibimbap [rice mixed with vegetables], buckwheat cold noodles and all the dry banchan [side dishes in Korean].”

Coincidentally, the traditional fermentation process involved in the making of kimchi in Korea was recognized as an intangible cultural heritage of humanity by Unesco at the same time as the traditional wine-making method of Georgia.

Berdzenishvili spoke with the Korea JoongAng Daily about the hundreds of different types of wine in Georgia, where to go in the country to taste them as well as what Korea and Georgia may do together in the field of gastronomy, beverages and tourism. The following are excerpts from the interview.

Left: An example of the Qvevri clay vessel in Georgia in which wine is kept and aged underground, a unique wine-making method recognized by Unesco as an intangible cultural heritage in 2013. Right: The types of wines and other drinks produced in each region of Georgia. [NATIONAL WINE AGENCY OF GEORGIA]

Q. What should we expect to see and taste at the event?

A. You should come expecting to taste exquisite Georgian wine, of course. We will have Georgian red wine, white wine and also traditionally-made wine. In Georgia, we have a special way of making wine in big clay vessels which are buried under the ground to ferment the wine. This fermentation process was recognized by Unesco as unique on the same date that Korean kimchi’s fermentation process was recognized by Unesco, as well. You will recognize this wine first by its amber color. It will be a completely new experience to those who have not yet tried the traditional Georgian wine.

The event is being hosted with the collaboration of Somerset Palace, which has been hosting events on Georgian wine for the past five years. There will be a movie screened at the event, made by sommeliers and experts, as well as an exhibit of works by young Georgian designers.

How many different grapes are there to make wine in Georgia?

There are more than 500 indigenous grapes in Georgia. It’s because the climate varies so much from one region to another, from one mountain to another. You will find some types of grapes grown on one side of a mountain in Georgia, and completely different types grown on the other side. But to try them, you will have to be on Georgian soil as many of these are home wine and only about 100 out of more than 500 are being exported.

If I were to travel to Georgia, which region should I go for wine tasting?

Is wine tourism quite big in Georgia?

Last year, we had hosted up to 9 million tourists in the country - which is triple the population of Georgia. Almost 25 percent of them were coming for the wines. We are hoping to have more come from Korea this year. We will be running direct, chartered flights between Georgia and Korea this year.

Once you are in Georgia to try the wines, you will also come across our culture of toasting. We have people called toastmasters, or in our language they’re called “Tamada,” which means chief of the table. Toastmasters give a minimum of 30 toasts per feast. It is not just about consuming wine, but about entertaining the guests with knowledge and wisdom on philosophy, history and culture. Some of these toasts will be too deep to be re-enacted elsewhere in the same form. You have to be in Georgia to experience it.

But one interesting similarity I found in drinking culture in Korea and Georgia is that the elders at the table tend to pour the drinks for the younger people, who would receive these drinks with the vessel in both of their hands. As it is in Korea, the respect for the older person among friends and families are very much upheld in Georgia.

Where do I need to go in Korea to pick up a bottle of wine from Georgia?

There are two to three small shops selling Georgian wine in Korea, but they are not yet available in large supermarkets. We are hoping to have more options available in online shopping sites here.

Our annual wine exports have reached 80 million bottles, around 20 percent of which goes to East Asia, including China, Japan and Korea.