Kepco reports an operating loss, the first in six years

Kepco reports an operating loss, the first in six years

The state-owned utility said that the loss was related to higher fuel costs. It added that the government’s policy of reducing the use of nuclear power was not a major factor in the results. 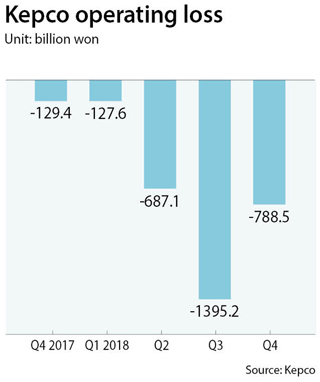 The operating losses have come as power usage has increased.

Analysts have cited the Moon Jae-in government’s policy of dismantling nuclear power plants to explain the loss, but Kepco blamed rising fuel prices. In 2018, the price of Dubai crude was up 30 percent year on year, while the price bituminous coal rose 21 percent and liquefied natural gas 16 percent.

“Although the intensified safety work on nuclear power plants did have an impact on performances, [that influence] has been miniscule,” said Park Hyung-duk, Kepco vice president.

Kepco said 82 percent of the increase in expenses was directly related to higher fuel costs, rising power demand and government policy. The contribution from the fall in the operation rate of nuclear plants was only 18 percent.

The company said the situation will likely improve in 2019 as international fuel prices started stabilizing in the fourth quarter of 2018 and the operation rate of nuclear plants has been increasing.