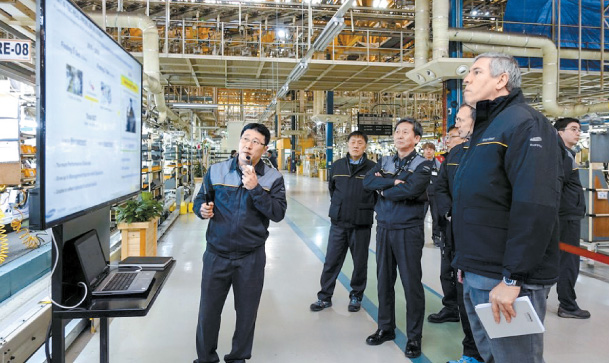 A top Renault Group executive parachuted in and explained some harsh economic realities to disgruntled workers at the Busan factory of affiliate Renault Samsung Motors.

Jose-Vicente De Los Mozos, executive vice president of manufacturing and supply chain, said that the affiliate needs to produce competitive cars to get orders and that, at present, productions costs are too high. He emphasized that strikes have only hurt the company and the workers.

According to Renault Samsung Friday, De Los Mozos arrived at Incheon International Airport Wednesday and traveled to the Busan factory where he stayed for about 10 hours from 8 a.m on Thursday.

De Los Mozos explained the difficult situation facing the Korean operations due to last year’s wage negotiations - which have yet to be concluded - and a series of partial walkouts by the union in its battle for higher wages, the carmaker said.

The executive from Renault’s Boulogne-Billancourt, its France headquarters, pointed out that production costs per hour at the Busan factory are already some of the highest among all Renault factories worldwide, and he warned that any rise in costs will harm the competitiveness of the factory in terms of group-wide production decisions.

He said that jobs can only be protected if workers offer competitive products, not when they go on strike. He offered the company’s factory at Valladolid, Spain, as an example.

The factory produced nearly 290,000 cars per year in 2002, but it had to let go of roughly 1,300 employees on falling demand and a deteriorating economic situation in Europe, he said. He added that a series of strikes by the union did not change anything.

What did bring change, according to De Los Mozos, was an agreement between the company and the labor union reached in 2009 that involved freezing wages for three years and working together towards restoring performance.

The Valladolid factory is now one of Renault’s most productive factories. In 2017, it exported 92 percent of the 250,000 cars it produced.

The executive asked employees to finalize the wage negotiations as soon as possible for the sake of the factory’s future.

It is crucial for the Busan factory to receive new orders. While it has been producing Nissan’s Rogue compact crossover on consignment, the contract ends in September. As Rogue production accounts for nearly half the workload at the factory, failure to win new orders could risk the factory following in the footsteps of the GM Korea factory in Gunsan, North Jeolla, that closed last year.

During the executive’s stay in Busan, the 16th round of wage negotiation took place for roughly an hour but ended without progress. As of Friday, Renault’s labor union has gone on 38 partial strikes, totaling roughly 144 hours of walkouts, according to company data.