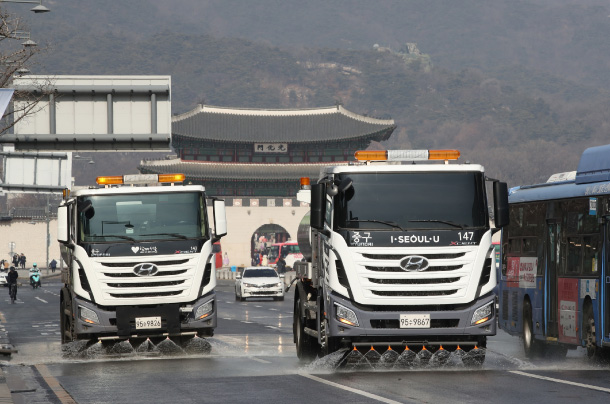 Korea enforced emergency measures to reduce fine dust nationwide, except Jeju Island, on Friday, as most of the country was blanketed by choking particulate matter for the third consecutive day.

The level of ultrafine particles, smaller than 2.5 micrometers in diameter, in Seoul rose to 85 micrograms per cubic meter as of 9 a.m., with the central province of North Chungcheong posting a level of 113, according to Air Korea and other fine dust watchers.

Korea’s authorities have classified the level of ultrafine dust particles, or PM 2.5, above 35 micrograms per cubic meter as “bad” and above 75 micrograms as “very bad,” while the World Health Organization recommends a limit of 25 micrograms.

Air Korea said the ultrafine dust levels were bad in all regions, excluding Jeju and Gangwon, Friday morning, and the entire nation is expected to be covered with thicker dust particles in the afternoon.

The emergency dust reduction measures were taken under the Special Act on Particulate Matter Reduction and Management, which took effect last Friday.

Under the special law, local governments are obliged to take various emergency steps if the daily average level of PM 2.5 exceeds 50 micrograms per cubic meter, and the figure is forecast to top that level again the following day.

If the emergency measures are enforced, heads of local governments have to strictly regulate the operation hours and utilization rates of coal power plants and other large-scale dust emission facilities. Construction sites will also be ordered to reduce the length of their operations.

Driving restrictions will also be implemented as stipulated by the ordinances of each local government.

The Seoul Metropolitan Government, for example, restricts the use of grade 5 emission vehicles from 6 a.m. to 9 p.m. and imposes a fine of 100,000 won on violators.

The National Institute of Environmental Research, a think tank under the Ministry of Environment, said that larger volumes of external fine dust will flow into the Korean Peninsula in the evening amid stagnant air in the region.

The Beijing government, on the other hand, has persistently denied any responsibility for fine dust in Korea.