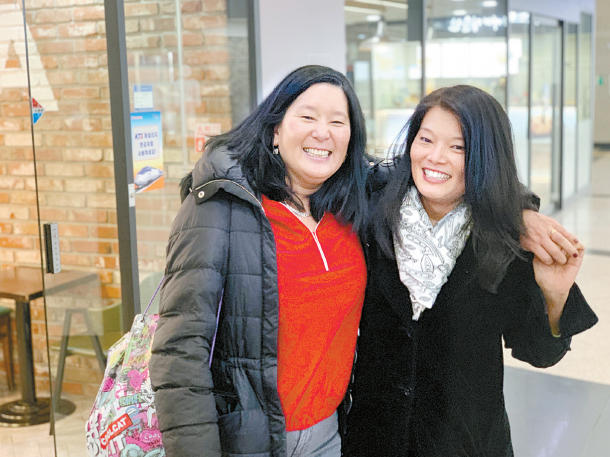 Christine Pennell, 50, left, and Kim Haelen, 48, who have lived apart for 47 years, smile as they put their arms around each other’s shoulders after having their first meet up Monday in Daegu Station. The two decided to release their story to the public in the hopes of finding their parents. [KIM JEONG-SEOK]

Christine Pennell and Kim Haelen were both born to the same mother in Daegu, but were separated for decades.

The two were abandoned by their mother and sent overseas through an adoption agency in 1972. They met last Saturday at Daegu Station in an emotional reunion.

Pennell, 50, grew up in the United States and Haelen was raised in Belgium. Their mother abandoned the baby girls at in the city’s Banyawol Station and Daegu Station in 1971. Pennell was sent to Ilsimwon Orphanage and Kim was sent to White Lily Orphanage in Korea before their adoption.

They have lived 47 years without knowing about one another. Both married and had three kids, with Pennell working in a law firm and Kim working as an educator for the disabled, until Kim conducted a gene test for her kidney operation.

Pennell who had always been curious about her roots, had already registered her DNA in the hopes of finding her family prior to Kim’s gene test. The results for Kim’s DNA test subsequently revealed that there was someone with identical genes living in the United States. It was then that they both found that they were long-lost sisters.

After hearing the news that she had long-lost sister, Pennell and Kim spoke over a video call. They were shocked to see each other’s similar reflections. They both love to dance and hate the taste of fish.

“I cannot forget that day when I received the email saying that they’ve found my sister. I’ve always wanted to meet my family, and there it was — an email that made my dream come true,” Christine recalled.

The two sisters had their dramatic reunion on Saturday at Daegu Station.

“As I got down from the platform, I saw my sister. She didn’t see me, but I flung down my bags and ran towards her. She cried a lot that day,” said Kim.

The two also visited Daegu Station on Monday to see a photo exhibition of Daegu’s old days inside the station.

They have also made plans to find their missing parents.

“During the early ’70s, there were lots of incidents where parents deserted their children due to their hard lives. We believe that there is a high chance that these sisters’ parents are still alive,” said a staff member from the Banet Foundation, a foundation that helps overseas adoptees locate their parents.

“Our parents must have had their reasons, and we don’t blame them — we never did. All we want is to meet them, even just once, and take care of them,” Christine said.

Meanwhile, the two sisters decided that releasing their story to the public will increase their chances of finding their parents.