From afar, “Paper Bags,” left, looks like a serene white bamboo forest. But up close, the work is actually a collage of tiny images that depict the estimated 1.14 million paper bags used in the United States every hour. Jordan’s take on Botticelli’s “Birth of Venus,” right, is made of 240,000 images of plastic bags - the estimated number of bags used every 10 seconds. [SUNGKOK ART MUSEUM]

Around 48,000 gallons of oil are consumed around the globe every second. Every hour, 2.4 million pounds of plastic pollution enter the world’s oceans.

While many would agree that excessive consumption and pollution are posing huge environmental threats today, it can be difficult to grasp the full scope of the problem when we can’t wrap our heads around these staggering figures.

Seattle-based environmental artist Chris Jordan urges people to connect with the problem on a deeper level by translating statistics into art and bringing to light harrowing images of wildlife devastated by uninhibited consumption.

His “Intolerable Beauty” exhibition at the Sungkok Art Museum in central Seoul opened last Friday. Made up of a 64-piece collection of photographs, artworks and a documentary video, the exhibition hosts installations depicting the human damage to the Earth’s ecosystem juxtaposed against photographs Jordan took in the lush forests of the American west coast that capture the raw beauty of unspoiled nature. 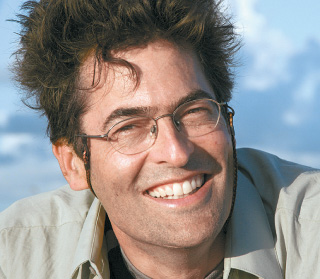 “When we look at something in the world like the cutting of a forest, the extinction of a species, or the destruction of quality of life for people in the future, if we don’t feel anything then we won’t act,” Jordan told local press ahead of the exhibition’s launch last Wednesday, emphasizing the need to give attention to the stark reality of urban consumption.

The exhibition showcases Jordan’s “Running the Numbers” collection, which contains carefully photo-shopped collages that appear beautiful and serene from afar, but up close reveal hundreds of thousands, even millions of tiny images of mundane objects like paper bags and plastic cups that reflect the shocking levels of waste discarded everyday. Jordan’s take on Botticelli’s “Birth of Venus,” for example, is made up of 240,000 tiny images of plastic bags, which represent the estimated number of bags used around the world every 10 seconds.

Also on display at the exhibition are Jordan’s iconic photographs of baby albatrosses choked to death by plastic waste in the Pacific’s Midway Islands. The photos show carcasses with open stomachs filled with vibrantly-colored plastic pieces, like bottle caps which have been transferred to the birds by their parents who mistook the items for food.

While in the Midway Islands, Jordan developed a keen interest in the albatrosses, which eventually led him to develop a full length documentary titled “Albatross” that intimately chronicles the life, death and birth of the large sea birds.

Jordan worked with various cinematographers and producers over eight years to complete the film, making multiple visits to the island. The film, released last year, is also playing at the exhibition.

“When I was at the Midway Islands photographing the dead birds, I fell in love with the live birds,” Jordan said. “I realized that if I only photographed them I couldn’t really show them because you have to [see] them moving.”

The exhibition is being held at the Sungkok Art Museum through May 5. Tickets are priced at 8,000 won ($7.11) for adults, with opening hours from 10 a.m. to 6 p.m. every day excluding Mondays. For more details, visit www.sungkokmuseum.org.