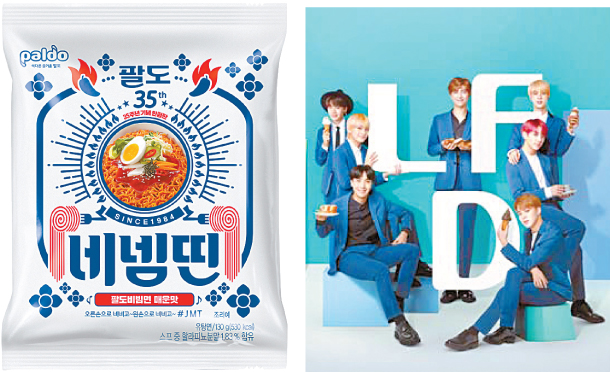 Paldo’s Gwaldo Nenemttin, left, and Lotte Duty Free’s LDF campaign, right, utilize a marketing strategy that follows the internet trend of taking apart hangul and putting them back together so they look in a way like Korean words. The rejiggering is done to appeal to young consumers. [PALDO, LOTTE DUTY FREE]

Having fun with hangul has become a recent retail trend.

Hoping to capture the interest of consumers in their teens and 20s by speaking the language of the young, a growing number of retail companies, including Shinsegae Group’s e-commerce website SSG.com and Lotte Duty Free (LDF), have incorporated a marketing strategy that reconstructs hangul to allow for new readings.

Just as a capital “B” could be pulled apart so as to appear like the number 13, the components of hangul letters can be separated to look like other letters.

Paldo’s new bibimmyeon (cold spicy noodles) is one of the latest offerings that seeks to appeal to consumers with this bizarre deconstruction, and it is taking the internet by storm.

Celebrating its 35th anniversary, Paldo, the instant noodle maker, introduced Gwaldo Nenemttin in a limited rollout Tuesday. It is a spicier version of its original bibimmyeon, and a total of 15,000 packages - 75,000 packets - of the new product were sold on the first day, despite only being available on the 11st online shopping website. Paldo was planning to sell that amount in a week, but the noodles were gone within a day of the release.

The company said it will start selling the product at brick-and-mortar stores in March.

The entertaining marketing strategy is seen as the prime reason for the noodle’s success despite being released in the winter, when demand for bibimmyeon is generally low.

The noodle catches the eye with its bizarre lettering, which does not make any sense when read, but appears to resemble, in a way, “Paldo Bibimmyeon.” The campaign is connected to the internet trend of deconstructing hangul characters to achieve new, fun readings.

Paldo was initially reluctant to use rejiggered hangul.

“Before the release of this product, there were concerns about the wrong use of the language,” said Yun In-gyun from Paldo’s marketing department. “But we concluded that it would be more effective to use the language of the young if they are our prime target.”

Despite similar concerns, other retail companies, such as SSG.com and LDF, have employed playing-with-words strategies to gain market recognition. In advertisements, SSG.com has referred to itself as sseug - which is what SSG would sound like as a word. In Korean, sseug is an onomatopoeia commonly used to describe sliding something to someone. The brand instantly became the talk of the town when it was introduced in 2016. Last year, SSG.com unveiled a commercial featuring a newly-created SSG.com language.

As for LDF, it started its “Nyam” campaign last year. When L and F are placed side to side with the D below, it looks like the word nyam in Korean, which sounds like yum. LDF explained that the campaign expresses hope that consumers feel happy while shopping.

The incorporation of newtro styles in the instant noodle’s packaging has also been effective. A portmanteau of new and retro, “newtro” is the latest trend seen across industries, including fashion and games. Diverging from Paldo’s traditional blue packaging, Gwaldo Nenemttin has a white background.

“It’s true that the response is pretty good,” said Kim Eung-jun from Korea Yakult, which promotes Paldo products. “But considering that the average annual sales of our original Bibimmyeon is 1 billion units, even if we sell out 5 million units, that are not actually all that much.”

Reactions to Paldo’s latest release are mixed. While older people generally express concern regarding the wrong use of hangul for a type of food that the public commonly purchases, younger people say that they feel the marketing strategy is quite refreshing.

“The important part of marketing is to appeal to consumer emotions and instincts rather than logic or grammar,” said Prof. Jung Yeon-sung, who teaches business at Dankook University.

“So it might be desirable to incorporate such a strategy as the means to break away from the old image.”