Take that bibimbap! Samgyeopsal wins in a poll

Take that bibimbap! Samgyeopsal wins in a poll 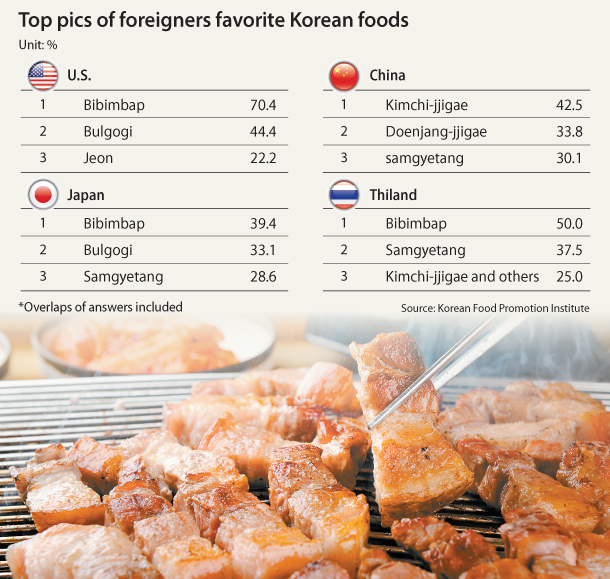 Bibimbap is often the first Korean food that comes to mind when foreigners think of Korea. And why not? Gwyneth Paltrow loves the dish and even has her own recipe.

But when foreigners visit the country, their opinions evolve. Their favorite Korean dish becomes samgyeopsal, the bacon-like sliced pork.

According to a recent Korean Food Promotion Institute survey, 34.5 percent of foreigners chose bibimbap as the first Korean dish that pops into their heads when they are asked to name a quintessential Korean food.

While the ingredients that go into bibimbap can vary greatly, in general, it is a bowl of rice with vegetables, Korean gochujang chili pepper paste, sliced or minced meat and fried egg.

The famous foods that followed were kimchijjigae, or kimchi stew, and samgyetang chicken soup. The survey was based on a poll of 1,000 foreign tourists who traveled to Korea between June and July last year. They were asked to name three classic Korean dishes that they were aware of before coming to Korea.

The dish American tourists were most familiar with before traveling to Korea was bibimbap. Seven out of ten - 70.4 percent - picked the dish as the first Korean food that they were aware of. Bulgogi, or grilled meat, came in second, while jeon - fried fish or meat - came in third.

Bibimbap is seen as becoming popular in the United States as a healthy food with abundant vegetable.

The quintessential Korean food for Chinese tourists was kimchijjigae. Among the foreign tourists who were surveyed, only Chinese visitors failed to name bibimbap as a top-three dish.

The second most recognized Korean food among Chinese tourists was doenjangjjigae, or soybean paste stew.

It is believed that the Korean TV drama series “Dae Jang Geum,” known as “Jewel in the Palace” popular in China, raised Chinese appreciation for Korean food.

The show depicts a woman working in the palace cooking a variety of healthy foods to cure an ailing king.

When it came to naming their favorite food after traveling in Korea, many picked samgyeopsal, or pork belly. Grilled dishes, such as bulgogi, were next. In general, dishes with a meat base were popular.

“In foreign countries, a completed dish is served, whereas in Korea, the customers can roast their meat on the brazier and then wrap the sauce-dipped meat in lettuce,” said Lee Jae-sik, an official at the food industry promotion division of the Ministry for Food, Agriculture, Forestry and Fisheries. “Along with the deliciousness, this kind of unique cultural experience seems to leave foreigners with a special memory.”

Foreigners participating in the survey said they like Korean food because it is delicious. They also see the free side dishes and exotic cultural experience as major positives.

Were they satisfied? The survey indicated “yes.” Many liked restaurants providing foreign language menus, the friendly atmosphere and accessibility of restaurants.

However, they said they had trouble communicating with restaurant staff, while hygiene and the relatively expensive prices were also issues.

Foreigners said that unisex restrooms were problematic. The report suggested that improvements on this front should be prioritized.