An American pitcher is taking his former Korean club to court in a contract dispute. 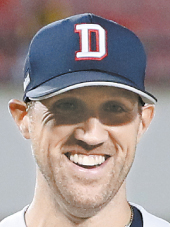 Josh Lindblom has sued the Lotte Giants of the Korea Baseball Organization (KBO), seeking $200,000 in a buyout that he claims the club failed to pay in 2017, said the player’s attorney, Kim Gyeong-young, on Saturday.

Kim said Lindblom had wanted to settle the case with the Giants but chose to take legal action as the team refused to find the middle ground.

Instead of picking up an option for $1.4 million, the Giants offered him a new deal worth $900,000. Since the Giants had declined to exercise the earlier option, Lindblom sought a $200,000 buyout that he thought he was due.

The Giants countered that their $900,000 offer included the buyout figure. But that means the Giants were actually offering Lindblom $700,000 in guaranteed salary, and that would have been in violation of the KBO rules on foreign player contracts.

The league stipulates that a team intending to re-sign a foreign player must make an offer worth at least 75 percent of the previous deal. Because Lindblom made $1.2 million in 2016, the Giants should have offered him at least $900,000 in guaranteed salary for 2017 if they wanted to retain him.

Lindblom returned to the United States and had a minor league stint in the Pittsburgh Pirates system before rejoining the Giants in July 2017. The right-hander pitched on a $475,000 deal.

Lindblom then joined the Bears last season, where he found considerable success. In 2018 he came second in the voting for regular season MVP and went on to win the ERA award with a regular season ERA of 2.88. As a result, Lindblom could make up to $1.92 million next year, making him the highest paid foreigner in the KBO.

The trial is scheduled for March 7 in Busan, the home of the Giants.

In response to Lindblom’s suit, the Giants said they’ll wait for the court’s ruling.

The Giants were also embroiled in a contract dispute with Canadian pitcher Scott Richmond. The right-hander had signed a one-year, $700,000 deal before the 2013 season but suffered a knee injury during spring training. The team cut Richmond and refused to pay him.

In that case, Kim Gyeong-young also represented Richmond, who ended up getting $270,000 from the Giants.