PARK TAE-HEE
The author is an industry news reporter of the JoongAng Ilbo. 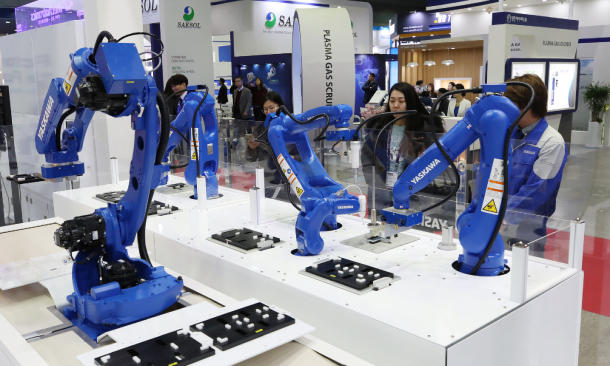 The model employee is “always polite […] they always upsell, they never take a vacation, they never show up late,” Andrew Puzder, the former chief executive of CKE Restaurants, the parent company of Hardee’s, said in an interview with a business magazine in 2017. He also revealed his plan to try an “employee-free operation.”

Humans are replaced by machines in places not exclusive to stores like Hardee’s. In production lines, industrial robots have been driving large-scale labor forces out of factories. According to the World Robotics Report by the International Federation of Robotics, 381,000 industrial robots were sold worldwide in 2017. China’s Changying Precision Technology replaced the workload of about 650 employees with 60 robots. As a result, its annual production of 8,000 units increased to 21,000 units, and the defect rate fell from 25 percent to 5 percent. If one robot can replace 10 workers, as in Changying’s case, 3.81 million jobs would be replaced by robots around the world last year alone.

What choices do Korean chief executives have as they struggle with low labor flexibility? There are 631 robots per 10,000 workers in Korea, the highest in the world. It is over eight times the global average. Germany’s ratio is 309 to 10,000 workers and Japan’s is 303 to 10,000 workers. Chief executives cannot help but love robot workers that do not complain about overtime, do not go on a strike and do not take breaks.

While the administration advocates focusing on jobs, two notable events have taken place. Hyundai Motor has decided to scrap its practice of annually recruiting about 10,000 employees at a certain time; meanwhile, the government is promoting temporary employment with about 800,000 won ($714) a month to college students to check classroom lights or remove posters in street markets. The abolition of regular recruitment and temp jobs seems unrelated, but they are actually bound together. At a time when robots do all the work and people are unemployed, we have to understand that humans have been pushed out of workplaces by automatons and are not given decent jobs.
About 100 years ago, the second industrial revolution was a revolution of mass production. Mass production was made possible by mass employment, so it was valid to hire tens of thousands of employees at once, train them and put them in the production line.

The manufacturing industry that created jobs on a large scale is sending signals that it cannot hire as many people as in the past in the age of automation and industrial transformation. That is why the fourth industrial revolution is desperately needed as it will create new jobs for creative, young people. I feel this sense of urgency rising as the presence of robots increases and new industries continue to be tied by regulations.