Local thriller knocks ‘Extreme Job’ from No. 1: After four weeks atop the box office, the hit comedy drops to No. 2

Local thriller knocks ‘Extreme Job’ from No. 1: After four weeks atop the box office, the hit comedy drops to No. 2 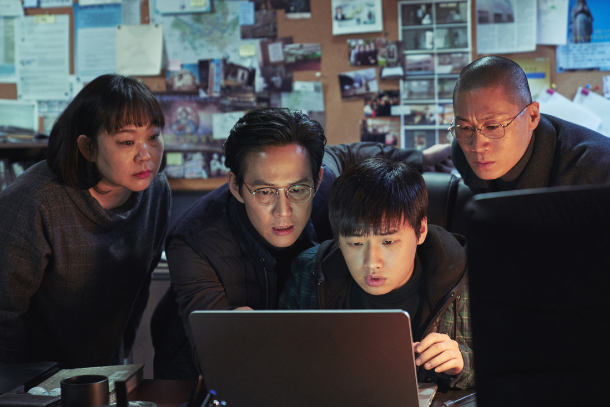 Local releases dominated the top of the domestic box office over the weekend, led by the thriller “Svaha: The Sixth Finger.”

From Friday to Sunday, “Svaha: The Sixth Finger” sold 840,000 admissions at 1,174 screens, accounting for 37.9 percent of the weekend’s ticket sales revenue, according to data provided by the Korea Film Council on Monday.

Directed by Jang Jae-hyun, who was behind “The Priests” (2015) and “Urban Evil” (2016), the movie tells the story of Pastor Park (Lee), a money-lover who carries out an investigation into a suspicious cult group called Deer Mount. As he delves deeper into the cult, he discovers the group has been involved in series of murders over the past several years, including that of a young female student whose corpse was found in a tunnel. The film pushes viewers to consider how a person’s faith can be exploited by radical religious leaders. 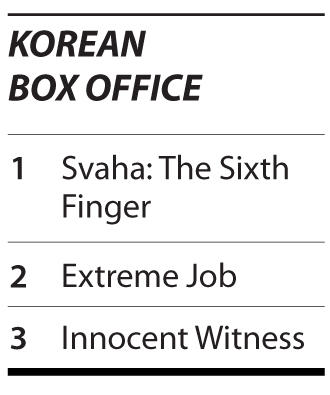 Since the movie’s release on Wednesday, it has sold a total of 1.1 million tickets.

Coming in at second for the weekend was “Extreme Job,” a comedy about a group of professional detectives that opens a chicken restaurant in order to solve a crime, but which ultimately does unexpectedly well. The film sold 478,000 tickets at 900 screens from Friday to Sunday.

The film hit the 15-million-ticket sales mark Saturday and became the second-highest-selling movie in Korean history on Feb. 11, right after the historical film “Roaring Currents” (2014).

The heart-warming drama “Innocent Witness” slid down a spot from the previous week to third place, with 454,000 tickets sold at 1,046 screens. Starring Jung Woo-sung and Kim Hyang-gi, the movie tells the story of an autistic teenager named Ji-woo (Kim) and Soon-ho (Jung), a former human rights lawyer who now takes on bigger cases for fatter paychecks. The movie develops after Soon-ho approaches Ji-woo, the only witness to a murder case in which he has to defend the suspect.

The animated film “Cinderella and the Secret Prince,” an adaptation of the popular folk tale, debuted in fourth after it was released on Wednesday.

The film sold 99,000 tickets at 574 screens in its first weekend. Directed by Lynne Southerland, who led “Mulan II” in 2004, the film revolves around princess Cinderella, who, together with her three mice, attends the Royal Ball. Over the course of the film, they discover a secret about the real prince: he has turned into a mouse due to an evil spell cast by the wicked witch. Cinderella and the mice thus embark on an adventure to save and return the “real prince.”

The action title “Alita: Battle Angel” slid two spots in its third weekend to round up the top five. The film has sold a total of 1.8 million admissions since its release on Feb. 5.

“How to Train Your Dragon 3,” “Harry Potter and the Chamber of Secrets,” “Happy Death Day 2 U” and “Marry Poppins Returns” took the seventh through 10th spots over the weekend.