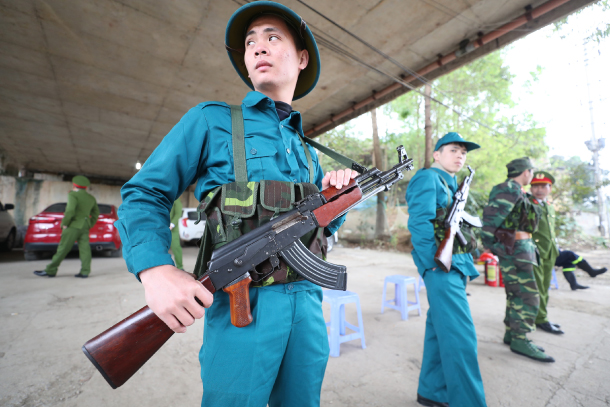 Soldiers armed with rifles guard Dong Dang Station at the China-Vietnam border on Monday. North Korean leader Kim Jong-un is expected to arrive at the station in Vietnam’s northern province of Lang Son today, ahead of his summit with U.S. President Donald Trump scheduled for tomorrow and Thursday. [YONHAP]

U.S. President Donald Trump and North Korean leader Kim Jong-un are headed to Hanoi where the two leaders will face off in their second summit, kicking off tomorrow.

The two leaders and their foreign affairs and security teams tomorrow and on Thursday will look to build on their first summit eight months ago in Singapore, aiming to produce a more concrete roadmap toward the North’s denuclearization in exchange for security assurances.

Trump on Sunday announced over Twitter he will leave Washington early Monday for Hanoi to meet Kim, adding they both expect “a continuation of the progress” made at the June 12 summit in Singapore.

Kim and his entourage has been traveling some 4,500 kilometers (2,796 miles) to Vietnam on his special armored train through mainland China after departing from Pyongyang Railway Station on Saturday. His train was expected to arrive in Dong Dang in Vietnam’s Lang Son Province bordering China early today.

Both countries’ working-level and logistics teams have been in Vietnam since last week working to narrow differences in the agenda and make last-minute preparations for the second North-U.S. summit.

However, with the exception of U.S. Secretary of State Mike Pompeo and John Bolton, the national security adviser, Trump’s negotiating and logistics team has completely changed from the first summit.

Stephen Biegun, the new U.S. special representative for North Korea, has been holding daily talks on the ground since Thursday with Kim Hyok-chol, a North Korean diplomat in charge of U.S. affairs with the North’s State Affairs Commission, fine-tuning the summit agenda.

Joe Hagin, the White House deputy chief of staff who led the U.S. advance team for the Singapore summit and has served under the Ronald Reagan, George H.W. Bush and George W. Bush administrations, has been replaced by Daniel Walsh, the new deputy chief of staff for operations. Walsh has been working out logistics with his North Korean counterpart Kim Chang-son, who serves as Kim Jong-un’s de facto chief of staff.

Likewise, retired U.S. Marine Corps Gen. John Kelly, the former White House chief of staff, and Andrew Kim, the former head of the CIA’s Korea Mission Center, will all be missing this time around.

In comparison, Kim’s team remains relatively similar to the Singapore summit. Kim Yong-chol, a vice chairman of the North’s ruling Workers’ Party’s Central Committee; Ri Su-yong, a party vice chairman and director of its International Department; Foreign Minister Ri Yong-ho; Minister of the People’s Armed Forces No Kwang-chol; and Vice Foreign Minister Choe Son-hui were named by North Korean state media as a part of Pyongyang’s delegation to Vietnam. So was Kim’s younger sister and closest aide Kim Yo-jong, who was paired with Pompeo during the signing ceremony for the June 12 joint statement by Kim Jong-un and Trump.

In the seating arrangement for the first summit, Ri Yong-ho was matched with Bolton, Kim Yong-chol with Pompeo and Ri Su-yong with Kelly.

Ahead of flying to Vietnam, Trump painted a rosy picture of economic growth for North Korea, especially because of its strategic location.

“Chairman Kim realizes, perhaps better than anyone else, that without nuclear weapons, his country could fast become one of the great economic powers anywhere in the World,” tweeted Trump, because of “its location and people.”

Pompeo told Fox News Sunday that his team in Vietnam is “continuing to flesh out” and “develop a roadmap for a path forward between the two countries,” but admitted they “may not get everything done this week.”