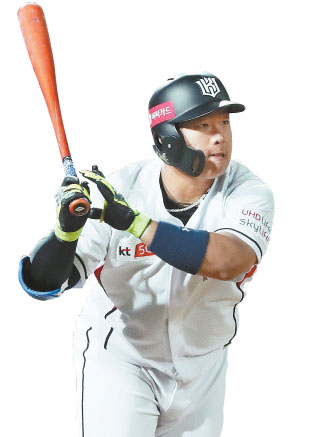 When Kang Baek-ho debuted last year, the super rookie seemed like a baseball prodigy. Apparently able to play any position on the field, the 2018 KBO Rookie of the Year was unlike anything to hit a Korean ballpark in years. 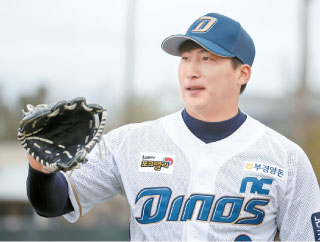 Na Sung-bum of the NC Dinos warms up ahead of a practice game against the KT Wiz in Tucson, Arizona, on Feb.19. [YONHAP]

Except he wasn’t. Just a few years earlier, Na Sung-bum of the NC Dinos also burst onto the scene with a career trajectory surprisingly similar to Kang.

Both players were already famous before they turned pro. Na was the star of Yonsei University’s baseball team, while Kang made his name at Seoul High School where he became the first player to ever hit a home run out of Gocheok Sky Dome in western Seoul.

Both Na and Kang were best known as pitchers when they were amateurs, but both changed positions when they turned pro. Na made his debut as an outfielder in 2012 under the recommendation of the Dinos’ former manager Kim Kyung-moon. At the time, the Dinos were still in the Futures League.

Outfielder was the right decision. In his six seasons in the KBO, he has a .315 batting average with 141 home runs, averaging 23.5 home runs per year. Not only that, he became the first hitter in the KBO to make 170 or more hits in a single season for four straight years, from 2015 to 2018.

Thanks to his consistent performance, Na will be the Dinos’ captain for the coming season and is one of the KBO’s leading batters.

Kang also played as an outfielder during his rookie season. Although he did make a surprise debut as a pitcher during the 2018 KBO All Star Game, he has yet to take to the mound during the regular season. However, before the Wiz left for spring training, new manager Lee Kang-chul said Kang could pitch in the upcoming season, although the club has since said its unlikely.

Although it may be too early to say that Kang is best in the outfield, he has shown his slugging ability by hitting 29 home runs in his rookie season. Kang’s 29 home runs were good enough to set a new record for a rookie straight out of high school.

As left-handed batters, both players are strong when it comes to power, flexibility and contact. But it’s not only their strengths that are similar. Kang showed the exact same weakness as Na when he first started his professional career - defense.

During their amateur careers, both players rarely played as outfielders and, due to this, their defense was weak. Even worse, right after their debuts, they were both assigned to play defense on the opposite side to the one they were accustomed to.

“I’m regretting not playing in outfield a lot during my amateur career,” Kang said during spring training in Tucson, Arizona on Feb. 10. “It’s tougher than I expected.”

Kang even says he is more stressed about his defense as an outfielder than he is worried about potentially playing in two positions.

Throughout the 2018 season, Kang made six errors. Although he is not the best outfielder in the league yet, he has shown positive development. As he used to be a pitcher, Kang showed confidence in his throws.

As his performance in the outfield can directly impact his season at bats, during spring training Kang is focusing on improving both his defense and his batting.

“I did make improvements in defense compared to the time when I made my [KBO] debut,” Kang said. “But considering the work I put into, I’m not improving fast enough.”

When Na heard about Kang’s stress and concerns, he offered a few words of encouragement based on his own experience.

“I had similar concerns, too,” Na said. “I couldn’t even take care of easy bounces. I was embarrassed to call myself a professional player.”

To be a better player, Na tried his best to get over the pressure.

“If I can’t get over it, I’ll fall behind in the competition for that position,” Na said. “I trained thinking that I’ll lose my spot on the field.”

Na improved each season until last year. Of the right fielders in the league, he played the most innings at 1,220 with only three errors.

“I’m not at a level to be rated as a good defensive player,” Na said. “But I want to be recognized as above average. I think in outfield defense, 99 percent is meaningless. I should not be making a single mistake. It’s difficult. But to avoid errors or mistakes, I need to maintain my concentration and keep on training so my body can follow along with my judgment.”