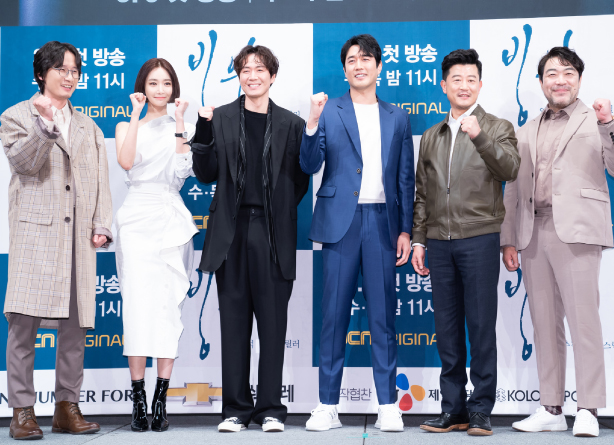 Cable movie channel OCN, best known for its original action-packed thriller TV series, is back with another one of its exciting investigation dramas, “Possessed,” which focuses on the relationship between humans and spirits.

Starring actors Song Sae-byeok, Go Joon-hee and Youn Jung-hoon, the thriller, set to premiere on March 6, tells the story of two detectives who team up to chase an “evil soul” that possesses people’s bodies to commit crime.

Song assumes the role of professional detective Kang Pil-seong, who is often mistaken as a criminal because of how he looks. Although he is a brave man who is never afraid to fight against thieves and murderers, deep inside he is afraid of ghosts and the dark.

Go, meanwhile, portrays Hong Seo-jeong, a detective with psychic powers whose interest in Song stems from his pure spirit. Although she looks strong on the outside, she is actually a lonely woman whose mother left her at a young age.

Together, Kang and Hong use their supernatural powers to investigate a recent murder case, which, coincidentally, resembles a series of murders that occurred two decades earlier. As it turns out, a serial killer’s soul from 20 years before has returned to commit more crime.

According to the series’ director, Choi Do-hoon, “‘Possessed’ is an exciting drama that not only features thriller and mystery elements but also fantasy, romance, comedy and drama.”

While the plot of “Possessed” may sound similar to OCN’s 2018 series “Son: The Guest” - which also dealt with a team composed of a shaman, a priest and a detective who combat crimes committed by demonically possessed individuals - director Choi says his series is very different.

“Unlike ‘Son: The Guest,’ ‘Possessed’ is not a horror series. The focus is not on the demons, but on humans themselves. Also, ‘Possessed’ starts with a light tone in the beginning and gets heavier toward the end. It combines a variety of genres.”

The two lead actors - Song and Go - who first met while filming the sci-fi movie “Heavenly Creature” in 2012, both feel they are very different from the characters they portray, which is what makes the series all the more appealing.

“They were very different in terms of acting style and experience,” the director explained. “They got along very well and 70 percent of the show is about their strange chemistry.”

Actor Song added, “When I first met her, I thought she was too pretty to be on this show. As we started filming, our gestures and expressions became pretty similar, so everything turned out very well.”

The thriller series is the story of “people who live in the age of rage.”

“I wanted to express this age of rage through fantasy creatures called spirits and demons, and how characters overcome them in the modern age,” the director said.