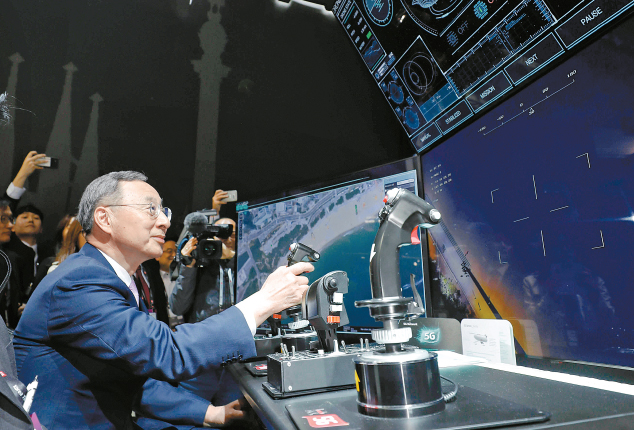 BARCELONA, Spain - Hwang Chang-gyu, CEO of Korea’s No. 2 mobile carrier KT, said 5G is a business area where Korea can rival global IT firms like Google and Microsoft.

“I believe 5G is an area where Korea can stand out globally once again after semiconductors,” said Hwang at a press conference with Korean media in Barcelona on Monday.

“It is a service where we can go head-to-head with global tech firms like Google and Amazon.

Korea is slated to have 5G smartphones by the end of March, making it one of the world’s first markets to have smartphones that run on the super-fast network.

“KT has worked on 5G technology development for the past four to five years,” said Hwang.

“When I first talked about it back in 2015 at MWC, it wasn’t easy [to convince people] because back then 4G wasn’t even properly installed.

“But since last year, the world has become more enthusiastic about 5G than me. And I believe that we are off to a good start by successfully demonstrating a 5G Olympics last year in PyeongChang.”

Hwang said 5G should not be considered a mere network, but a platform.

“The moment you think about 5G as a network, things will start to get hard because, first of all, it is hard to secure investment as there seems to be no business model,” the KT chief explained. “But, as I have been continuously saying, 5G is a platform that encompasses big data, artificial intelligence, Internet of Things and more.”

When asked about the brand of the 5G smartphone he showed the audience during his keynote speech on Monday, Hwang said it was a Samsung phone.

“But it doesn’t really matter which brand it is because when it comes to ‘world’s first 5G smartphone’ it means that nearly 85 percent of the 5G technology installed in the phone is what we have developed and demonstrated in PyeongChang.”