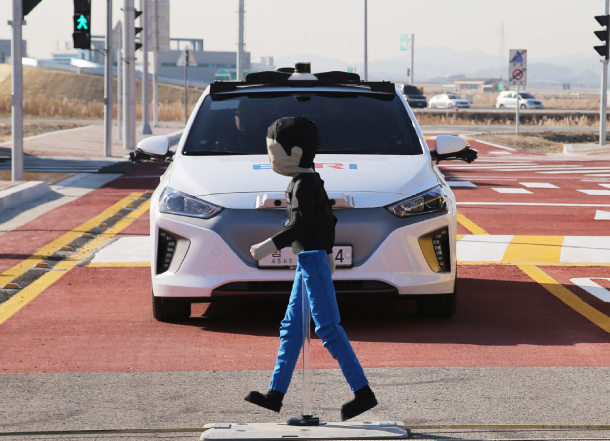 An autonomous vehicle operated by employees of the Korea Transportation Safety Authority, a state-run transportation agency, undergoes a test at K-City, a testing site for self-driving cars in Hwaseong, Gyeonggi, on Dec. 10 last year. The test is to check whether the car can recognize a pedestrian or not. [YONHAP]

K-City, a proving ground for autonomous cars located in Hwaseong, Gyeonggi, will be open for three months from March 4 and made available to SMEs and universities interested in testing their relevant technologies.

According to the Ministry of Land, Infrastructure and Transport, demand is growing for a place to test autonomous vehicles.

In one case, a university research lab received government approval to drive its development vehicle on the road through existing toll booths, but the process was quite expensive and time consuming as the roads had to be blocked off and traffic diverted.

A start-up recently developed its own autonomous driving technology but was concerned about the risks of testing it on streets shared with the public. It has only been able to drive the vehicle in parking lots and in empty lots, and the project was unable to gain momentum.

“While real road testing has been increasing at a fast pace, there’s a need for an exclusive testing ground so that repeated tests can be made to speed up the development of the technology,” said a ministry official. “We not only plan to provide the road for testing but also provide free equipment to analyze the collected data.” 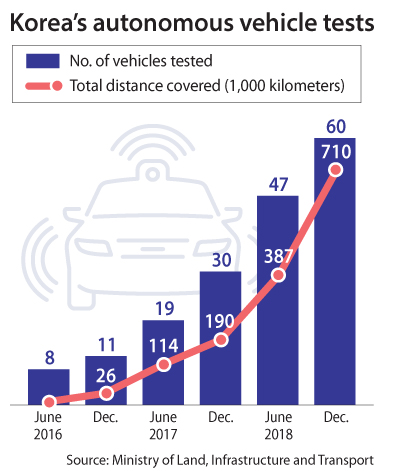 K-City, which covers a 360,000-square-meter (88.9-acre) area, was completed at the end of last year and is considered an ideal testing ground for autonomous vehicles. Developers can conduct a total of 36 different tests.

President Moon Jae-in, in his New Year’s speech, stressed the need for government support, including the allocation of funds for the development of innovative growth projects. Areas of focus include autonomous vehicles, big data, artificial intelligence, the hydrogen economy and smart factories.

“Only innovation will improve the economic dynamic and allow for a breakthrough from low growth,” President Moon said. “By connecting science and technology with start-ups and innovative growth, we will not only lead in the fourth industrial revolution era but also create jobs.”

Google is currently in the lead in terms of the commercialization of self-driving cars. In December last year, it introduced the world’s first self-driving taxi in Phoenix, Arizona.